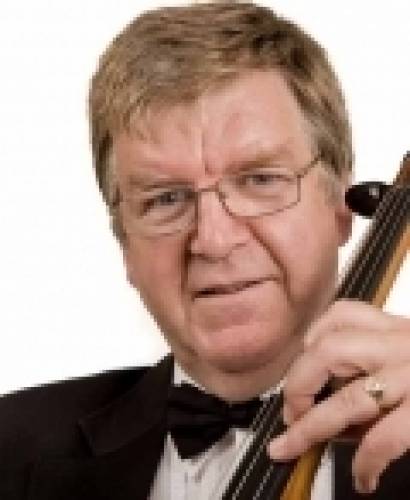 Having trained at the Royal Manchester College of Music 1964-7 as a double bass player and composer, David Wainwright, now ARMCM, became a freelance orchestral, jazz, pop & rock bass player (after investing in a bass guitar). One composition, Night of Meditation, was broadcast by the BBC Northern Orchestra while he was still at music college.

He started teaching in 1968, first on ‘cello, bass & guitar, later as a curriculum development leader for music in schools. With his wife, Pamela, he developed an approach to large group mixed strings tuition, which gave learning an instrument more of an orchestral feel without compromising on standards or pace of learning. This led to the publication of their tutor book, 'Your First Year Violin Course' (for further details visit the springquartet website).

Since the work was quite novel in concept, it was necessary to create learning materials. A keen fan of the music of Bartok, Kodaly, Stravinsky and Shostakovich, he wrote materials which tried to introduce students to some of their musical styles in an enjoyable manner while at the same time progressing their technique on the instruments.

As a composer he has devoted most of his output to the pupils he and Pamela tutored, from beginner groups through to youth orchestras. One of his works for youth orchestra, Overture for an Occasion, was played on tour in Belgium and broadcast on Radio Piccadilly, while a later work, Reflections for Orchestra, was featured in an International Youth Music Festival in Valencia.

He has appeared on (British) national and local radio and television as a player, composer, conductor of youth orchestras and spokesperson for music in education. Most of his playing is now on ‘cello in the family string quartet, the Spring Quartet, with Pamela and their two daughters, Penny on viola, for whom he wrote a piece for solo viola and piano, Tears of the Heliad, and Emily leading on violin for whom he wrote Eminadya for solo violin and piano.

Having taken early retirement from his post as Deputy Leader (and acting Leader) of Manchester Education Music Service, he has now returned to his first love; composing and arranging music

Whilst teaching, he became a leading specialist in World Music, particularly Indian classical, Chinese, African drumming and Steelpan, and introduced practical study of these genres into schools.