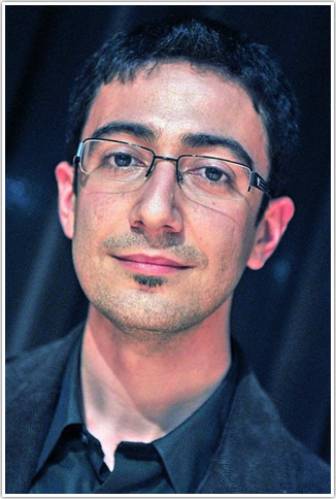 Ernesto Mateo was born in 1981. He began his musical studies in his town, Arucas (Gran Canaria), and later he entered the Las Palmas Conservatory, where he studied piano with Agustín Chirino, obtaining his degree in Piano and Music Theory in 2002. He went on studying with teachers as José Luis Castillo and Galina Neporozhnya, and receiving lessons from Thomas Mark and Nicolai Lugansky, among others.

In 2008 obtains with honors his Composition degree at the Conservatorio Superior de Música de Canarias, where he studied with Daniel Roca, Laura Vega and Manuel Bonino. He continued with postgrads studies with Alfredo Aracil, Mariano Etkin and Agustín Charles Soler. His works have been performed by artists such as Cuarteto Ornati, Orquesta Filarmónica de Gran Canaria, and the Gran Canaria Sinfonietta, who premiered his concerto for toy piano and orchestra. Recently, he has been awarded with the first prize in the 2nd International Composition Contest 'Antón García Abril'.

He is also a member of the association Promuscan, which promotes the music of the canarian composers, and since 2003 he teaches Piano and Harmony in the music school of Santa Lucía, in Gran Canaria.