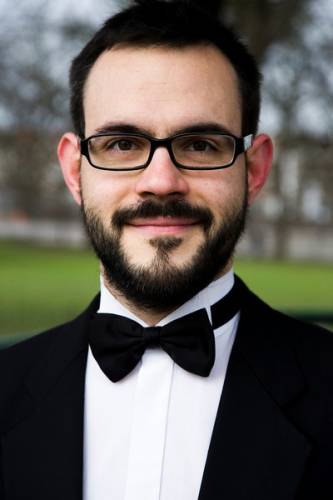 I was born in Hastings in 1977, but was raised in Watford. I moved to south London a few years ago with my life partner, Chris, and we're now happily settled down in Forest Hill, in our own little place just around the corner from the world-famous Horniman Museum.

I conduct Lambeth Wind Orchestra and can also be found guest playing most wind and brass instruments, including alto/bass/contra-alto clarinet, tenor/baritone sax and trombone/euphonium, even dabbling in percussion every so often.

My chamber orchestra piece 'Green Sky' won the Making Music Award at the British Composer Awards 2008 and my 'Requiem' (Opus 15) was given its world premiere in April 2009. 'The Something In-Between', an oboe/cor anglais concerto was first performed by the dedicatee, Isobel Williams, in January 2010.

Several of my pieces have been given their premieres by London Saxophone Choir, including 'Mission: Improbable' and 'Fanfaricus'.