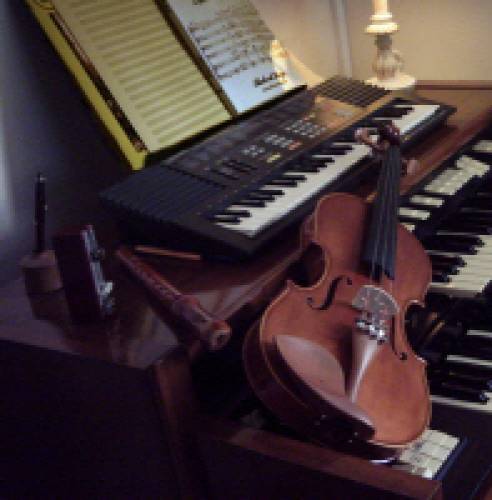 Peter Dewar-Finch Composer Contemporary Classical / Neo-Classical /Neo-Baroque / Choral / Piano / Organ /Alternative / Ambient. From a musical family background, I began as a student of the York School of Art in the mid 1970s, initially as a painter and graphic designer and made full use of the music facilities available at that time becoming interested in electronic and synthesiser, and singing on the amateur Operatic stage.

In 1985 - 86 I founded the York Arts Forum, in York, UK, an interdisciplinary organisation promoting the arts including visual, painting, sculpture, ceramics, music, theatre, dance and as many aspects of the arts as possible with a view to contributing to the 1987 York Festival. In the short time the organisation existed it made a considerable impact on local culture and spawned numerous spin-offs.

As a freelance self publishing composer I compose and arrange music independently, but I'll also work to private commission when engaged to do so. The majority of works are intended for live performance, and to that end, it is in Sheet music form, as befits the tradition of 'Classical' music and is only represented in audio as digital (or occasionally live) demos. Music was recently commissioned for premiere in Paris in autumn 2010 resulting in two Sonatas for Flute and Piano.

Online scores are published by Score Exchange.com though demos of individual pieces are also available. Many audio items are published and available for download via Reverbnation.com. See the links below.

Mp3 files have now been added to SOME of the scores so that you can hear them closer to the way they were intended to sound. It is recommended that you use the MP3 link on the score in preference to the MIDI playback. Unless you really like MIDI.