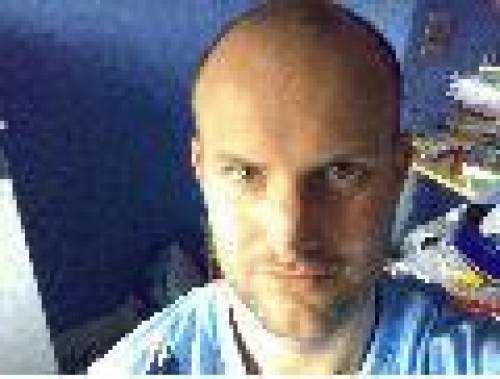 Richard Charles was born in Withington Hospital (about two miles from Manchester City's spiritual home-Maine Road) on April 24th 1971. He lived in a suburb of Chorlton cum Hardy until 1977 when he was uprooted to a sheep farm on top of a Welsh mountain. Here he managed to resist any local temptations by hitting his Drum Kit in a converted cow shed until all hours of the night. This same cow shed later proved very useful for a certain Percussion Quartet to do likewise. Richard's early musical experiences included playing trumpet in the school orchestra and flugel horn in the Llanrug Silver Band. The call of the drumstick eventually proved too strong and he graduated to the post of percussionist (along with big sister Kate-now Dr Charles!) with that band. His prowess for counting hundreds of bars rest led him to a position with the National Youth Orchestra of Wales (1987-1990). In September 1989 Richard again moved to a quaint Yorkshire Hamlet, known locally as Huddersfield, to commence studies at the Polytechnic. This institution changed its name to "The University of Huddersfield" just in time for Richard's graduation in 1992. To this day Richard still lays claim to being the first percussionist to graduate with honours from that university! Studies continued for Richard for two years at the Royal Northern College of Music in Manchester. He then settled in the north of that city with his children Isla and Dexter. Beat This - Richard's collection of graded percussion solos was recently published by Southern Percussion.