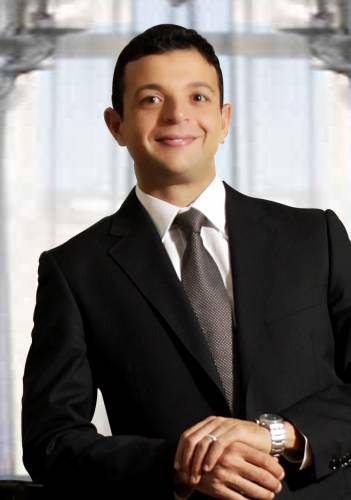 • Born in Alexandria in 1982, and began studying piano at age of 6 in Conservatoire d'Alexandrie. • He studied piano with Dr. Minou Ghareb and Mme Lea D'Ambra and Mme Marcel Matta • In 1999, he achieved Diploma in Piano and Music Theory from the Academy of Arts. • In 2001, he achieved Grade 8 from the Royal School of Music- London. • In 2002, he won the first prize in piano in Alexandria first Competition for Music. • In 2003, he received Performance Certificate from Trinity College of Music- London. • In the same year he played in Cairo Opera House in the 50th Anniversary for the Royal School of Music in Egypt. • He worked as Piano teacher in Conservatoire of Alexandria, KMH music center and Russian center. • In 2004, he achieved Bachelor of Science in Communications and Electronics from the faculty of Engineering- Alexandria University, Egypt • In the same year he joined the 2nd International Alexandria Mediterranean Song Festival and accompanied the French singer Bernand Pisani in Alexandria Opera House. • Also he joined the Italian Cultural Week and accompanied the mezzo-soprano Katarina Nikolich in Alexandria Opera House. • Since that year, he joined the Bibliotheca Alexandrina Chamber Orchestra as Pianist, Harpsichordist, Arranger and Orchestra Librarian. • As a soloist, he gave many solo recitals in Alexandria such as Bibliotheca Alexandrina, Goethe Institute, French Cultural Center, Russian Cultural Center, Alexandria Center of Arts, Hellenic Cultural center and Cairo Opera House, he also gave many Solo Concertos with Alexandria Opera House Chamber Orchestra and Bibliotheca Alexandria Orchestra • As an accompanist, he gave many recitals with soloists from BA Chamber Orchestra. He accompanied the French cellist Walter Grimmer, the Italian tenor Raffaele Schitino and Baritone Lugui Crillo. He also accompanied the BA choir and its children choir. • In 2015, he founded the “Rhapsody Duo” with the cellist Ahmed Abdel Hakim, they gave many recitals in Alexandria and Cairo. He also in 2016 he founded “The Alexandrian Piano Ensemble” which gave piano ensemble repertoire for 4 hands (Piano duet) and 6 hands (Piano Trio). • He attended the Finish Egyptian Cultural bridge masterclass in Chamber Music under supervision of Ralf Gothoni. • He studied Music Composition and Orchestration with Peter Edwards , Jason Allen and Jonathen Peters • As an arranger, he arranged many pieces for a variety of chamber ensembles, chamber orchestra and symphonic orchestras, his arrangements were played by notable Egyptian soloists and singers with Egyptian Orchestras, like Bibliotheca Alexandrina Orchestra, Alexandria Opera House Orchestra, Cairo Symphony Orchestra and Cairo Opera House. Conducted by Dr. Hassan Sharara , Sherif Mohie El Din , Nayer Nagui ,Mohamed Saad Basha , Ahmed Atef and others • His arrangements has being played internationally by Orchestras like Iceland Symphony Orchestra in (Maximus Musicus project supervised by the conductor Vladimir Ashkenazy and Berliner Philharmincer Virtouso Orchestra with the violin soloist Laurentius Dinca. Also he have arrangements played by the conductor Antonio Poppano and others. • In 2016, he started to play percussion instruments with the Bibliotheca Alexandrina Chamber Orchestra beside Piano and Harpsichord. • In 2018, he founded the “Soundtrack Orchestra” with the violinist Mohamed Barakat, which is specialized in performing soundtracks of International and Arabic movies. • As a composer, he composed many pieces for Piano, Guitar, violin and chamber groups. His compositions were performed in Egypt and other countries. His composition “Oriental Dance for Solo Guitar “was performed by the Hungarian Guitarist David Pavlovits in 2007. • He composes music for children theater and animation movies • Beside his musical career, he works as Instrumentation engineer.