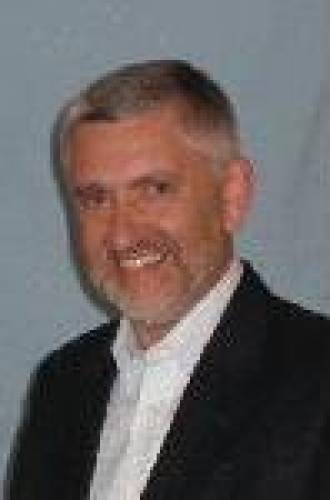 Andrew Moore is a composer, conductor, arranger and music editor, and also a catholic priest.

He was born in Hayes, Greater London in 1954. After schooling at St Benedict’s, Ealing he went to the Royal Academy of Music in London where he graduated in advanced orchestral conducting, studying also the violin and the organ. Additional conducting studies followed in Berlin and St Petersburg. In 1982 he was ordained a priest as a member of the Benedictine community at Downside Abbey, having obtained a degree in theology at Cambridge University (Christ’s College). At Downside he taught music and religious studies and was a Housemaster and Bursar. As monastic choirmaster for some fifteen years he led the daily singing of Gregorian Plainsong and helped to maintain and foster a high standard of liturgical music with appearances in several radio and television broadcasts. He has sung in Rome as cantor at papal masses. As school choirmaster he directed the Schola which participated in European festivals and tours. From 1993-95 he was parish priest at the Downside Parish of Little Malvern, the church where Elgar lies buried. In 1996 he stepped aside from monastic life for a more active ministry in the Diocese of Portsmouth and has served in the parishes of Winchester, Lambourn and Hungerford, Ascot and Westbourne. From 2007 - 2019 he was also part-time Priest-in-Residence at St Mary’s School, Shaftesbury where he was musically much-involved. In 2021 he retired from active ministry and now lives in Hampshire.

As a composer, Andrew Moore is perhaps best known for his liturgical and organ music, having written several widely-used mass settings, many responsorial psalms, motets, anthems and carols, and a varied selection of works for organ. However, his works range well beyond church music. He has written much instrumental music, a song cycle and many other songs, as well as chamber and orchestral music. Larger scale works include a cantata for tenor, chorus and orchestra and a Requiem for chorus and orchestra. There are many influences at work in his tuneful and accessible compositions. ‘English Pastoral’ may be applied to many pieces and he makes much use of modal music (the plainsong influence) but there are also elements of jazz harmonies (his father was a very accomplished jazz pianist). His extensive and intimate knowledge of the broadest range of classical music from Byrd to Bernstein, from Schutz to Shostakovitch also tells. His music has been performed across the world from Austria to Malawi, from Luxembourg to the USA.

As an editor and arranger, Andrew Moore has been heavily involved in the compilation of several major hymn books in wide circulation and other liturgical collections. He has also made many and various arrangements of classical pieces and compiled, arranged and edited collections of much instrumental music ranging from Bach to Joplin, Janacek to Schubert .

Since 2011 he has been conductor of the Winchester Camerata which has explored and performed much of the extensive repertoire for string orchestra.

Thank you for your visit.