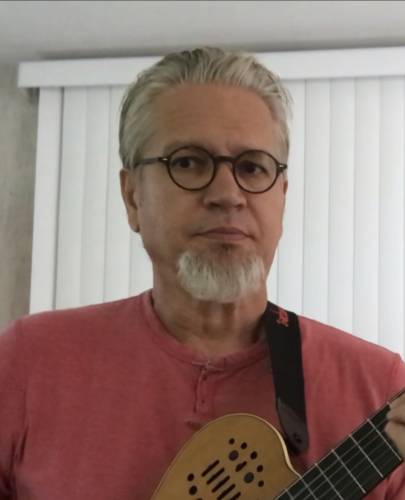 In 1982 Alexander joined the Minsk College of Music in Belarus, where he was studying for 4 years. Then he went on to graduate from the Belarussian Academy of Music in 1990 with Bachelor's and Master's degrees in teaching and performing classical guitar.

He has performed all over Belarus, and worked in music schools, including the Minsk Pedagogical University from 1982 till 1992. He won prizes in both the USSR Jazz Festival in Appatity (1982), and the Republican Competition in Lida, Belarus (1985). From 1990-1992 he performed in the State Belarussian Philharmonic as a guitar soloist. During this time he took part in many concerts and guitar festivals in Belarus, Russia, Ukraine. In the summer 1994 he went on a concert tour to Germany. While in Germany, he participated in Nurtingen Guitar Festival and studied in master classes, with Leo Brouwer, Costas Cotsiolis and Sergio Assad.

In August 1995 he was invited to participate in the "Burnham Market Festival" in Norfolk, UK, where he performed solo, and in duo with principal BBC cellist Paul Watkins. From 1996-1999 Alexander was working as "Musician in Residence" at the Orwell Park School, a leading independent English School in Suffolk, UK, where he continued his teaching activities while performing all over the UK. Among the well known British musicians he performed with at that time were: Scott Stroman, Paul Watkins, Sir David Willcocks and others.

In 1998 Alexander was granted a scholarship to study postgraduate course with Robert Brightmore at the Guildhall school of Music & Drama in London. He graduated from Guildhall in 1999 with the Master's Degree in Music Performance, receiving the 1st prize at the school's guitar competition.

Alexander moved to the U.S. in 2000, where he has continued to perform, and teach guitar and music classes at schools in Connecticut and Massachussets. In 2001-2004 Alex received training in Suzuki Guitar method with David Madsen, Frank Longay and Mary Lou Roberts at the Hartt Music School, CT.

Alex has composed, transcribed, and arranged a number of pieces for classical guitar. He has released six CD's to date: "Graphics", "Take Five" in 1996, "Reflections" in 2001, and "Napule" in 2004, "Romantic and Charming Music" for guitar and violin in 2009, and "Wind in Your Hands". All six CD's include Alex's original compositions and arrangements for guitar, violin, and tenor voice. Currently Alex resides in Branford, CT, and teaches classical and Suzuki guitar at Neighborhood Music School in New Haven, CT.