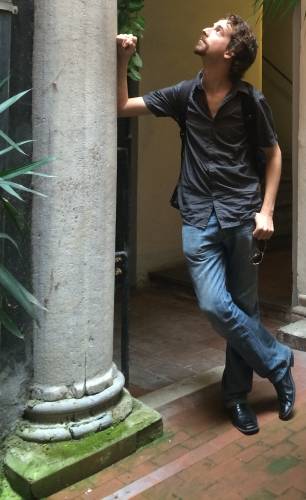 Byron Goble was born in Germany and grew up in Houston where he began his formal musical training at an early age with the violin. As a member of the Fort Bend Boys Choir, he made international concert tours, performed at ACDA and TMEA conventions, and appeared with the Houston Symphony, the English Symphony Orchestra, and the Mexican Symphony Orchestra. From 2000-2004, he was a member of the Stephen F. Austin HS Honors Band and Drum-line which consistently ranked among the top band programs in the nation. Goble is a graduate of Texas A&M University where he earned a BA in Music and German. At A&M, he was a member of the studios of Brian Vogel, Isaac Bustos, Peter Lieuwen, and Paul Sikes, studying percussion, classical guitar, composition, and orchestral conducting. Byron was a prizewinner in the 2011 and 2008 Classical Minds Guitar Competitions as well as the 2007 Eastfield Collegiate Guitar Competition and was a founding member of the A&M Guitar Quartet, which won 2nd prize at the 2010 UTB Guitar Ensemble Competition. He has performed in master classes for renowned artists such as Pepe Romero, Adam Holzman, Grisha Goryachev, and Bob Guthrie. In 2009, Byron was invited to perform as a soloist at the Guitar Orchestra Workshop in Plano, TX where he served on faculty. Mr. Goble conducted the premier of his work, Amazonas, which he composed for the 2012 Classical Minds Youth Guitar Orchestra. Also, he has taught at the Texas Music Festival, the Greater Houston Guitar Guild and is a sought-after clinician and adjudicator for school music ensembles. Mr. Goble maintains a studio of private students, many of whom have won awards at Regional and State UIL competitions. He has worked with the Katy Taylor HS Band, directed the Bastrop Intermediate Choirs, and taught high school German in Katy and College Station. Affiliations include the GFA, Mu Phi Epsilon, and TMEA.