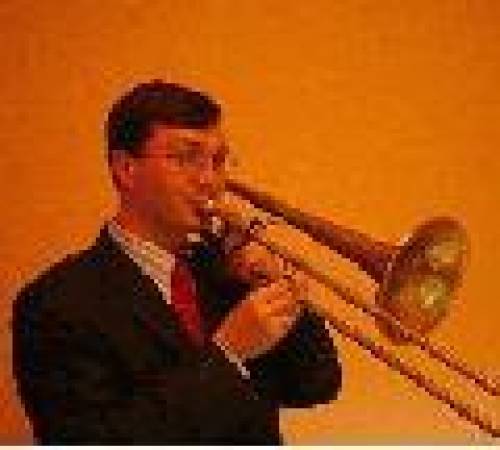 Mr Blakely originally hails from Connecticut where he studied trombone performance, composition and arranging at the University of Connecticut while earning a Bachelor of Music. In addition, Mr Blakely is an honors graduate of the US Armed Forces School of Music in Virginia. His former trombone instructors include George Sanders, Andy Rodgers and John Mosca. Mr Blakely studied composition with Avo S�mer and classical and jazz arranging with David Baker and John Mosca. Mr Blakely has preformed with many professional ensembles, including the New England Chamber Orchestra, the Willimantic Symphony Orchestra, the Wooster Symphony Orchestra, the Connecticut Trombone Quartet and in 2000, was selected as the director of the 1st US Armored Division Jazz Ensemble, The Iron Knights, located in Bad Kreuznach, Germany and spent many years touring all of Europe with this ensemble. In 2001, The Iron Knights were honored to become the first US Army Jazz Band ever to play in the country of Bulgaria. Mr Blakely has worked and/or preformed with the following musicians, composers, and conductors throughout his career: Jared Spears, Anthony Iannaccone, Warren Benson, Victor Borge, Ron Nelson, Morton Gould, Karel Husa, Thomas Duffy, Francis McBeth, COL John Bourgeois, Frederick Fennel, Jerry Nowak, Chely Wright, and Kid Rock. Currently living in Germany, Mr Blakely works as a free-lance trombonist of jazz and classical music and as a composer / arranger.