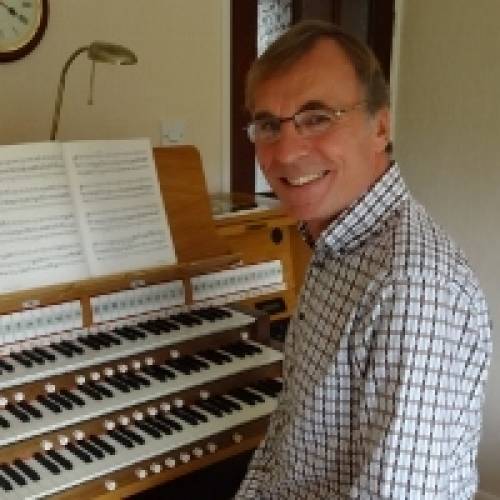 Chris initially taught himself to read music and improvise at the piano as a child, then, in the 1960s, was taught piano by Lilian Bushel, and organ by William Talbot, former Darlaston borough organist and methodist church organist. Although composing music was his passion, he decided to train to become a maths teacher at Dudley College of Education. However, while at college, he became involved in music activities, including accompanying soloists and playing piano in the college jazz band. Then, early in his teaching career he became involved in a whole range of youth music activities and was encouraged to make music his specialism. So he decided to study music, part time, at Wolverhampton University under Margaret Oakley and gained the L.T.C.L. He also studied with the Open University and gained the Dip. Ed.

He has done much to promote the teaching of music in schools, both in the classroom and working with school choirs, youth brass ensembles, music festivals and musical dramas. He has also worked with church choirs and performed many organ recitals, mainly at St. John's Methodist Church, Wolverhampton, where he has now been organist and choir leader for over forty five years.

After eventually becoming a head teacher he has now retired, enabling him to devote more time to composing and arranging music. His many compositions include original pieces and arrangements for solo organ and piano, musical dramas for schools and pieces for youth brass bands. He has also composed a number of Christmas choral settings of words by the Wolverhampton poet, Sheila Barnfather, which have been performed by choirs both locally and further afield.