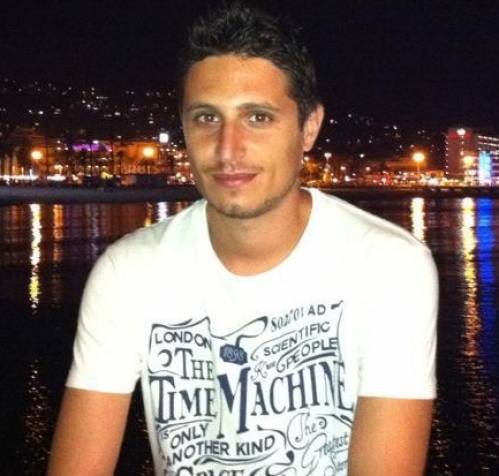 He was Born in Murcia on 5 February 1981 and began his musical studies at the School of Music 'Las Musas de Guadalupe'. Subsequently, he become part of the students of the Music Conservatory of Murcia, where he was taught saxophone receives by Fco Miguel Peñalver and Sixto M. Herrero Rodes, the latter with whom he ended his professional musical studies. He got the first place in the entrance examination at the Higher Grade LOGSE Conservatory of Music of Murcia in the specialty of saxophone and studied saxophone with Antonio Salas Perez. In December of 2007, he ended the degree of saxophone at the Conservatory of Murcia 'Manuel Massotti Little' obtaining the qualification of the highest honors. After that, he studied saxophone with Marie Bernadette Charrier, Philippe Lecocq, Christophe Bois, Philippe Braquart, Eric and Jean-Marie Devallon Londeix among others.

At this time he teaches saxophone in the School of Music 'Maestro Emilio Cebrián' and 'Las Musas' of Guadalupe. Moreover, he is part of the 'Banda Sinfónica de la Federacion de Murcia', where he is saxophone soloist and has been part of the 'Conjunto de Saxofones del CSM de Murcia', 'AIRA Saxophone Quartet' and 'Ensemble de Saxophones ZAMBRA', being actively involved with this group in the XIII World Saxophone Congress, held in Minneapolis (Minnesota, USA). Currently, he is a member of 'KATHARSIS Saxophone Quartet' Quartet which is composed entirely of professional musicians from the region of Murcia. This Quartet has been a finalist in numerous competitions chamber such as the First International Competition Yamaha saxophone quartet, the CMCET 09 or the Eighth National Competition of Chamber Music Salzillo Francisco, which won first prize in the professional category and first prize at the 17th International Competition of Chamber Music 'Josep Mirabent i Magrans'.

He has attended courses in analysis, counterpoint and harmony with David Mora, (a composer honored by rtve), as well as classes in orchestration and composition of Sixto M. Herrero Rodes. He finished his studies of harmony and counterpoint in Murcia CSM getting superior grades. Moreover, he has taken courses for film music composition, with teachers as Arnau Bataller, Xavier Capellas and Pascal Gaigne. As a composer he has numerous compositions to his credit both for chamber groups to larger groups such as the Symphonic Band. Among all his compositions highlight: Nemesis (symphonic poem for band), 'Agüelico' (pasodoble de concierto), 'Crepúsculo' (for saxophone quartet), 'Luz del Alba' (processional march), 'Fantasía' (for saxophone ensemble) and Overture for 12 Saxophones (for saxophone ensemble). Apart from that, he has made arrangements of various works to increase the repertoire for the set of 12 Saxophones, emphasizing the three 'Dances Fantastic' by J. Turina (recorded on the CD 'Jarcia') the 2nd Dance of the 'Spanish Dance' by E. Granados (Oriental) and the Prelude and Fugue No. IV of Preludes and Fugue for piano by D. Shostakovich.

He has participated in numerous recordings as much as performer as a composer, highlighting the following works: 'Jarcia', 'Luz del Alba', 'Música Española' Banda Sinfónica de la Federacion de Bandas de la Región de Murcia', '125 Aniversario Conservatorio de Oviedo' y 'Banda de Música U.M de Torre Pacheco. Recently, his work 'Nemesis' has been released in the XVII Certamen de Bandas 'Ciudad de Murcia' by Musician-Cultural Association 'Las Musas' of Guadalupe, under the baton of José Ibáñez Barrachina. In that contest the band won the 2nd prize and the prize for best band in the City of Murcia. In May 2007, he won the Sixth National Competition for Chamber Music 'Francisco Salzillo' of Sewer, as part of the saxophone quartet 'AIRA', obtaining of the jury, a special critic for the interpretation of his own composition 'Crepúsculo', released in Murcia for the mentioned event. In April 2008 she received the 2nd prize in National Pasodobles Pozo Estrecho. In 2009 was a finalist in the International Competition YAMAHA Saxophone Quartet, First Prize at the VIII National Competition of Chamber Music 'Francisco Salzillo' of Sewer and First Prize at the 17th International Competition of Chamber Music 'Josep Magrans Mirabent i ( Sitges) all as a member of the Quartet 'Katharsis'.