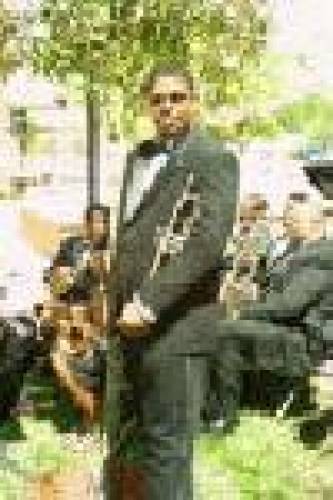 Contact Seller
Please note that you will need to sign in or register before you can contact this seller
Address:
Mr Edgar Wise
EMACINWI Music Inc
7980 Hampton Blvd
#322
North Lauderdale
FL
33068
United States

Edgar M. Wise was born January 20, 1965 in Washington DC, where he spent his childhood years. The second oldest of five brothers, Edgar became fond of music at the age of nine, and participated in the Kirk Singers Children's Choir of the Northeastern Presbyterian Church located in north east Washington DC. From the Kirk Singers, Edgar subsequently became a member of the Northeastern Presbyterian Church Youth Choir.

Edgar did not become interested in instrumental until the age of 12 when, while attending Robert Gould Shaw Jr. High School (Shaw), also in Washington DC, he became a student of Mr. Lloyd W. Hoover, a graduate of North Carolina A&T University. Edgar began his instrumental music career by learning to play the Double F French Horn; however, following the advice of Mr. Hoover, Edgar began to learn to play the Trumpet during the latter part of his seventh grade year at Shaw. The Trumpet would become Edgar's primary instrument for the next several years of his life. During his tenure at Shaw, Edgar participated in the marching, stage, and symphonic band programs.

Upon completion of his tenure at Shaw, Edgar became a student at Francis L. Cardozo High School (Cardozo) in September 1980, under the direction of Mr. Robert Gill. Edgar immediately became a member of the Cardozo High School Marching Band and, on January 1, 1981, had the distinct pleasure of participating in the 82nd annual Tournament of Roses Parade in Pasadena, Ca. This would become the first of many notable events for Edgar, as he also participated in the inauguration parade of the 40th President of the United States of America, and performed for Vice President George H. W. Bush's during the Push for Fitness Campaign in 1981. During his tenure at Cardozo, Edgar also performed as a member of the school's Jazz Band, and was the featured soloist on three selections. During his latter years at Cardozo, Edgar began to learn to play the Mellophone, a marching version of the French Horn designed to provide strong Alto support.

After his tenure at Cardozo, Edgar briefly performed as a member of the University of the District of Columbia Marching Firebird Band, where his was given the opportunity to perform during a Cincinnati Bengals Home Game in 1985. Edgar became a member of the US Navy in September 1985, and was assigned to Recruit Training Command Great Lakes, Il. As fortune would have it, Edgar was assigned to Recruit Training Company 85-938, which housed the recruit ceremonial units known as Triple Threat. Edgar naturally became a member of the recruit ceremonial marching band, and performed for three recruit Pass-In-Review ceremonies, including his own. Upon completion of recruit training, Edgar laid down his instrument, and began to fulfill his obligation to the US Navy. Seven years passed before Edgar, longing to fill an empty void in his life, decided to pick his instrument up again. In January 1992, Edgar purchased a trumpet from a pawnshop in Fayetteville, NC, and began to play again as a hobby. Edgar would not employ his instrument in a semi-professional manner again, until 2001.

Edgar's naval career bought him to Jacksonville, Fl in September 1995. Edgar served for two additional years in the Navy before departing at his EAOS in March 1997. After working in the private sector for four years, Edgar decided it was time to return to college, and seriously pursue a degree.

In August 2001, Edgar enrolled as a student at Edward Waters College, an African American Methodist based Historical Black College and University located in Jacksonville, FL. Although Edgar initially intended to major in psychology, he discovered that the school was in the beginning phases of establishing an instrumental music program. With music being his first love, Edgar introduced himself to Mr. Marques D. Graham, and auditioned to become a member of the Edward Waters College Marching Tiger Band (The Triple Threat). Edgar was named as the Trumpet Section Leader, a position he would hold for the following three years. Edgar was named Mellophone Section Leader during his last year of eligibility with The Triple Threat. During his first three years at Edward Waters College, Edgar participated as the lead trumpet player and featured soloist of the Edward Waters College Jazz Band. Seeking a change of pace during his last year, Edgar learned and played Alto Saxophone with the Jazz Band.

As he grew musically, Edgar focused his interest on arranging and composing music. One of Edgar's most notable compositions is "J.R.J. (The Rising Star)", which Edgar composed and dedicated to Dr. Jimmy R. Jenkins, the 26th President of Edward Waters College.

Church/Choir
Facing My Fears
Waiting For You
Jesus Lift Me Up
Jazz Band
Tag-A-Long
End Of My Rainbow
InSpiration
Almost Christmas Time
Marching Band
America The Beautiful
The Other Side Of Town
Bring The Boys Home
The Boss
Titan
Marches
The Rising Star
Contemporary
Lauriella
I Remember
To Hold You
Times In My Mind
Arielle (The Biggest Part Of Me)
Already Here
Neo-Classical
Numinous
Ethan’s Lullaby
I Take The 5th
Reflections
Rock (Southern or Other)
You're Busted
I Ride (It's Oh So Good To Me)
So The Story Goes
My other music
Pameta
ScoreExchange.com is operated by ADAP Solutions Ltd. ©
Sell sheet music |
Terms | Privacy |
Contact us | Blog |
Advertise | Help