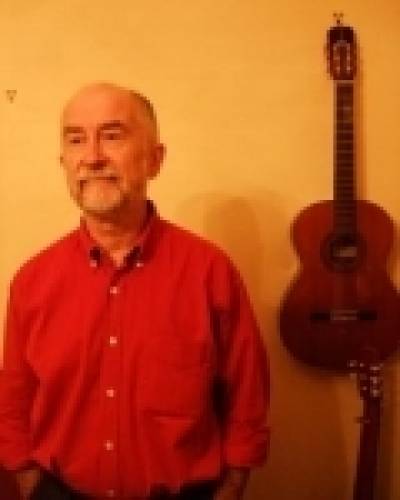 My wife and I met at Swansea University in 1967 where we helped to run the college folk club. Later in London and Gloucestershire we sang in a cappella harmony groups (incl. Regal Slip) as well as touring on the professional folk club and festival circuit as a duo. Sheffield (UK) became our home in 1981.

I play guitar, keyboard and English concertina. Songwriting has always been a key activity for me. Some of my songs like The Minstrel, The Black Fox and We Live We Love have been taken up by other singers and, on occasions, absorbed into the tradition.

Early recordings include The Magic Pear Tree (Folktrax), Clear Air of the Day (Cottage), To Friend and Foe (Dingles) and Hieroglyphics (Plant Life). Our first CD Borders of the Ocean was released in 1997. A compilation album (Early Birds - from original vinyl recordings) came out in 1999 and, in 2007, our most recent album, The Greek King`s Daughter.

In 2001 I formed the Sheffield Folk Chorale, a 90-strong choir, which performs my arrangements of traditional folk songs and less familiar carols. The choir has provided a significant impetus to write original but accessible material that fulfils the folk brief of having good tunes, narrative lyrics and strong harmonies. These, in the main, are the songs that I want to share with other groups. Of our five choir albums, the two most recent are No Easy Trade and Let The Rain Come. More information is available from our website.