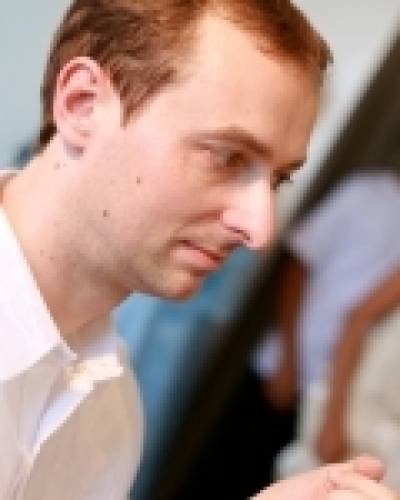 Dirk Radloff was born 07/03/1969 in Frankfurt/Germany and started to play violin at five. At the age of eleven he explored the piano and not much later he decided to exercise hard to become a professional violin player. At last he could study at the "Hochschule fur Musik und darstellende Kunst", where he trained the subjects violin, piano, viola, theory, composition and arrangement. During his studies he joined courses of german well-known Jazz-pianist and vibraphonist Karl Berger, who really inspired him to write first songs and arrangements. After some experiments with local bands, where Dirk Radloff sang, or played violin, he started to play also electric guitar. Compared to the classical area he liked the total freedom to develop his very own skills without any rules. Bored and a little bit frustrated by the local bands he decided in 2000 to start his own Progressive Rockband called "heartscore". During the following years until today "heartscore" released four full-time albums, which get critical acclaims all over the world. Influenced by the boyfriend of his sister, the composer Stefan Platte, he started in 2004 to go back to the classical area and to compose classical works. In his classical compositions Dirk Radloff is mixing influences of classical composers like Beethoven, Liszt, and Ives with modern Jazz and Progressive Rock. While using a wide range of tonality and dissonances he seldomly leaves the tonal area. He expands the tradition with upfront rhythmic elements, summing formal structures and Poly-Styles.