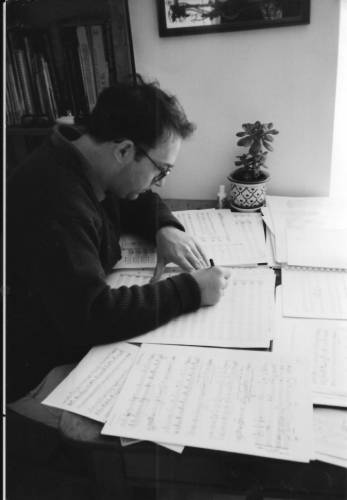 Anglo-Welsh composer, Dalwyn Henshall studied with William Mathias at Bangor University and with Einojuhani Rautavaara at the Sibelius Academy in Helsinki whilst in receipt of both a Welsh Arts Council Award to Young Artists and a Finnish Government State Scholarship. Subsequent doctoral and (Finnish Government funded) post-doctoral researches in Scandinavian and Finnish nationalism in music have profoundly affected his musical outlook and compositional style which has always been "mainstream traditional", actively eschewing modernism and avant-garde technique.

He retired from professional and public life in 2002 following a serious illness, and composes, nowadays, purely for his own entertainment and vanity having destroyed and disowned about half his mature output.

Pieces which are available on this website may be freely printed and or/performed where appropriate under the terms of the Creative Commons Licence but public performance and/or broadcast must be logged with the PRS.

The works included here as offered as matter of public record and as a freely accessible archive subject to the terms of the Creative Commons Licence. Most of the works offered here can also be found at the British Music Collection: the link is given below.

I am prepared to set out the orchestral accompaniment for brass-, wind-, or military band any of the concerted or orchestral works with a little notice and a programmed performance. The Trumpet Concerto, for example, would work - I think - particularly well with cornet solo, and the Bassoon Concerto with saxophone or euphonium. I should particularly like to do this for Vestamnviiki!

My old email address (dalwynhenshall@luxmail.com) no longer works but I can be contacted via the link through scoreexchange.