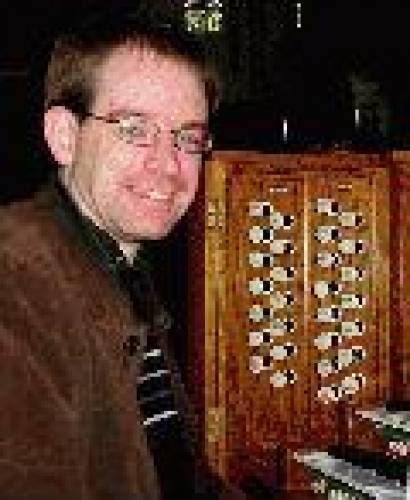 JOHN HOSKING was born in Cornwall in 1976 and studied the organ with Peter Jolley and David Briggs. At the age of 18 he was awarded the Organ Scholarship at the Royal Parish Church of St. Martin-in-the-Fields in London, also winning the Robertshaw Exhibition from the Royal College of Organists to study with Martin Baker.

A student at the Royal College of Music from 1995 - 1999, John was appointed the Organ Scholar of Westminster Abbey in 1996 and is the only person to have ever held this post for a period of three years. During this time he accompanied the Abbey Choir on many Royal and State occasions, broadcast on BBC Radio and gave 20 solo recitals in the Abbey.

Upon graduating, John acted as Assistant Organist at Lincoln and Truro Cathedrals before being appointed Master of the Choristers at Bramdean School in Exeter. In much demand as a recitalist and accompanist, John has given concerts in Sweden, Germany, Canada and America and broadcast on BBC 2, BBC Radio 3, BBC Radio 4 and worldwide on the Sky News and CNN programmes. He appears on several commercial CDs as soloist and accompanist, and has just released his second solo CD for Regent Records featuring large-scale German Romantic Organ Music.

John is now Assistant Organist of St. Asaph Cathedral. In his spare time he is to be found pulling pints at the local hostelry and has recently gained his Personal License enabling him to enter into pub management.

Canticles
Magnificat and Nunc Dimittis in D major
Magnificat in D major no. 2
Magnificat and Nunc Dimittis in A
Descants
Come down, O Love divine - descant
Descant for We have a gospel to proclaim
Christmas - choral works
O Come all ye faithful (organ reduction)
O Come, all ye faithful
The Angel Gabriel
For unto us a child is born (from
Silent Night
Hark! The herald angels sing (Festive introduction)
Piano works
Dream (from
John's compositions
Allegro from Symphonie no.2 in E minor
Grand Choeur Dialogue
I was glad
Lied
Suddenly
Thine be the Glory - Easter morning introduction
Voluntary in C Op. 7, No. 2
ScoreExchange.com is operated by ADAP Solutions Ltd. ©
Sell sheet music |
Terms | Privacy |
Contact us | Blog |
Advertise | Help