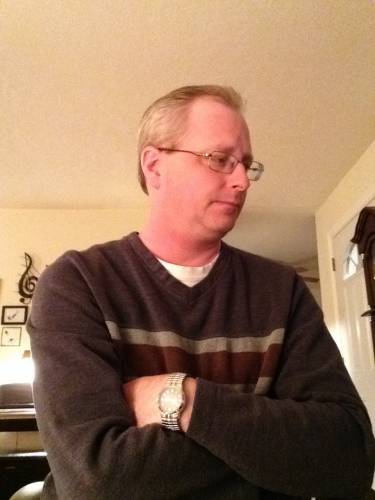 Jordan Grigg, Canadian composer/arranger, conductor, teacher, violinist, violist, pianist, born in British Colombia 1972, began his musical studies with the violin at the age of 2. He was inspired to be a conductor at age 5, and began composing when he was 7. He had his first composition lessons in the fields of harmony, ear training and dictation at the age of 9 with Alan Grigg, his Uncle. Jordan started playing in the NSYO when he was 10, switching to viola at 15 and winning several awards in festivals and competitions both at the local, provincial and national levels. Some of his repertoire included Viola Concertos by Bartok, Walton, Hoffmeister and Stamitz, the complete Cello Suites by Bach and several smaller works by Hindemith and Reger.

He was accepted to the NYO when he was 18 years and was soloist with Symphony Nova Scotia in performances of the Stamitz Viola Concerto. His studies have focused on viola performance, conducting, composition and music education.

He studied at the New England Conservatory of Music and Acadia University where some of his instructors have been Walter Trampler, Mstislav Rostropovich, John Felice, Gunther Schuller, Joseph Maneri, Pascal Verrot, Benjamin Zander, John Cage, Alan Hoffman, Owen Stephens and Christoph Both.

He has conducted performances of La Boheme by Puccini and Cavalleria Rusticana by Mascagni as well as symphonies, overtures, concertos and concert pieces of Beethoven, Mozart, Copland, Debussy, Shostakovich, Stravinsky, Sibelius and many others. He has also conducted premiers of several Canadian compositions and also his own works.

Jordan for a short time produced his own orchestra: AVSO or Annapolis Valley Symphony Orchestra in 2007 and ending its first concert with a standing ovation. He has conducted orchestras in the USA, Canada, South Korea and especially Italy where he was invited by the Teatro di Meruchini in Chieti, to conduct a performance of L’histoire du Soldat by Stravinsky.

He has had his compositions performed by a variety of ensembles such as the Nova Scotia Youth Orchestra, Symphony Nova Scotia, Annapolis Valley Honour Choir, New England Philharmonia and Symphony Orchestra as well as having these recorded on CD and aired on the CBC. His well known Three Sketches for Orchestra has had over 10 performances. Most recently he has had performances of his works in Southern Victoria (Australia), China, Africa, San Antonio (Texas) and the Columbia College Symphony of the Sierra (California). There was the Russian Premiere of his work Serenity for trumpet and small orchestra by a Youth Orchestra under the direction of Vyacheslav Shaldysheva performed at the Concert Hall of the Novosibirsk music school and yet another premiere of his small Concert Band work March by the Midleton Junior Concert Band under the direction of Robert O’Brien at the 50th National Band Championships of Ireland in the CIT Cork School of Music. More recently there was the premiere of his choral work Angels by the the award winning HNMCS Senior Choir under the direction of Helen Filipe and there will be an up and coming performance of his work C-H-R-I-S-T-M-A-S for large orchestra and chorus by the Gwinnett Symphony Orchestra and Chorus in December 2017. In March 2018 his Rustic Country Dance was performed by the Random Quartet in Italy.

He has composed music for over 30 plays/musicals/films and composed 41 symphonies, 41 string quartets, plus many other orchestral, chamber and choral works. His entire catalogue totals more 1500 works for orchestra, film and several different ensembles.

He was awarded Honorable Mention in the 2007 Adagio Contest held by the Fauxharmonic Orchestra in Baltimore, Maryland for his large string orchestra work Dolente and more recently 1st place in the 2015 SHSU-BMF International Composition Competition presented by Sam Houston State University and the Bolivian Music Festival with his composition Concerto Semplice for two violins and orchestra. Performances have been with the Bolivian Music Festival Orchestra in La Paz, Bolivia and the Sam Houston Symphony Orchestra in Huntsville, Texas with featured violin soloists Javier Pinell and Naomi Gjevre.

His latest commissioned work was Land of Hope and Beauty for large symphonic band, a work commissioned by Louis Sinoff which celebrates the history of New Mexico. He has been regularly commissioned from music ensembles and individuals in the United States, Italy, Australia and Switzerland to write original works but also jazz, tango, musical and opera arrangements, large orchestral and symphonic band works as well as several small ensemble pieces.

He has sold a number of his own compositions throughout Europe, Asia, Africa, UK and Australia as well as Canada and USA. His Symphony No. 15 was recently inducted into the Edna St. Vincent Millay Library in New York. Several of his own original compositions have been used in Doctoral Thesis works, recitals and competitions and have also been compiled into discographies in numerous universities across North America.

Teaching and conducting since 1992 through a number of schools (Wolfville and Horton School Strings, Cambridge Elementary School Strings, Landmark East, Kings-Edgehill, Berwick and District) and academies (Annapolis Music Academy, Dorian Hall), he now teaches and conducts at his own studio in the fields of classical, pop and jazz music, violin, fiddle, viola, cello, double bass, guitar, piano, clarinet, saxophone, trombone, theory, harmony, history, counterpoint, analysis, conducting and composition. Many of his students have gone on to continue their studies after high school in musical fields such as composition, performance, media/production and music therapy at Acadia University, Berklee College of Music and University of Toronto to name a few. Several of his students also compose, arrange and publish their own works, play in orchestras and teach in a number of different environments.