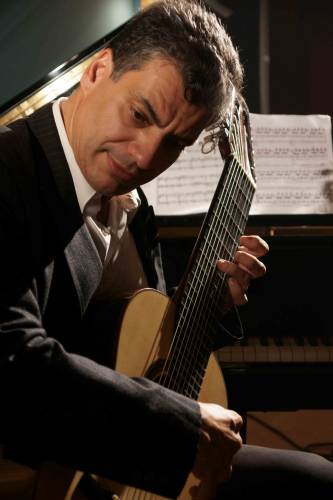 Jose d'Aragon creates with the guitar a true "Orchestral resonance" with a virtuosity admired by the critics worldwide. His interpretations are characterized by a sound entirely clear and transparent with an incredible range of colors, effects and techniques.

In 1983 he completed his music studies in Spain with honors, the same year travelled to Germany to study Orchestral Direction with the prestigious Maestro Sergio Celibidache.

During 1984 he performs concerts throughout Europe with the Bach College, the Munich philharmonic orchestra, Music Rinata, the television ZDF-ARD and the Bayerische Rundfunk and is appointed director of the chorus of the Institute of Culture of Munich.

In 1985 acts leading director jointly with the Maestro Sergio Celibidache, orchestral director of the Musikhochschule in Munich, for recording and concerts of the "San Matheus Passion" of Johann Sebastian Bach and in 1986 is invited to give concert tours as soloist and conductor in Europe and Japan to public and critics aclaim.

In 1990 Jose d'Aragon is appointed Doctor in Musicology. Records for varios record companies such as "Grammophon" "Ariola", "Pasarela" "FONO FSM" and "EMI" interpreting his own compositions and arangments. From 1991 to 1994 composed and acts for Japanese television as a concert soloist and conductor invited to perfom with the most important orchestras in the country. For a period resides in the United States performing numerous concerts, and giving lectures and seminars.

During 1997 and 1998 performs concert tours in South America collaborating with orchestras from Colombia and Venezuela, and as a jury member in international competitions.

From 2004 to 2006 performs concert tours in Europe and Russia. In 2007 establishes himself in Spain, Japan and United States organising numerous concerts, tours, conferences and international seminars.

Jose d'Aragon has composed many works for orchestra such as: "Symphony 1", Ballet of "The Haunted House", "Zeitwoelbung" "Symphonic Studies", "Dance Macabre", "The Clan," "Himno Galaxis", etc. and various compositions and transcripts for the classical guitar.

1977 First prize at the International Guitar Competition and recordings for the Spanish Radio and Television.

1979 First prize for his composition: Symfonie no 1. Starts performing with the 10-string guitar.

1984 Concerts all over Europe with Musica Rinata, Bach Collegium, Orchestra of Munich and Bayerische Rundfunk. He is appointed conductor of the Choir of Munichs Culture Institute.

1985-1986 Invitations from all over Europe, Japan and the United States to perform as a soloist.

1990 Jose is appointed Doctor of Musicology. Recordings for labels as Ariola, Pasarela, Fono FSM and EMI.

1991-1994 Jose dedicates his time composing, and transcribing. He also performs for the Japanese Television as a conductor and as a soloist.

1997-1998 Concert tour of South America where he performs with the National Orchestras of Venezuela and Colombia. He is also a much valued member of the jury at international contests.

1999-2003 Tours, concerts and seminars in the United States of America, Japan and Spain.

2007-2010 Since 2007 Jose lives in Spain, the United States and Japan, where he co-organizes and sponsors music festivals. He is also performing all over the world as a soloist on the 10-string guitar.