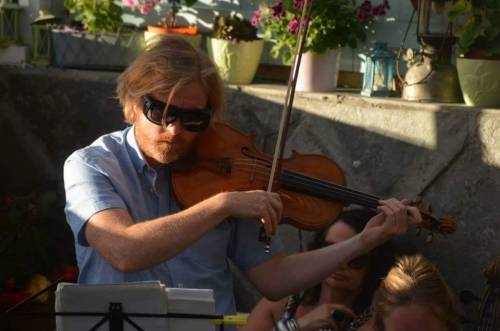 Jan Petter Hilstad studied violin at Trøndelag Conservatory of Music in Norway. During his studies he was a member of the TrondheimSoloists, both as violinist and a violist and a substitute for Trondheim Symphony Orchestra. After his studies in Trondheim he worked one year as a professional violinst in a string quartet, and thereafter for two years in a trio consisting of a singer, accordeon and violin. He then was offered a position in Trondheim Symphony Orchestra as a substitute for 2 years as a violinist. In 1997 he won the job as Sub-Principal Violist in TSO, before he in 2001 became Principal Viola in TSO. During these years he studied the viola at the Conservatory in Prague with Prof. Karel Dolezal. During all this time he has been teaching students, and conducted various ensembles, both Junior Wind Bands and a Junior String Orchestra. For the last 8 years he has been the artistic leader of Strinda Strykeorkester, and it is for this ensemble he has been writing numerous string arangements for young string players between 10-18 years old.