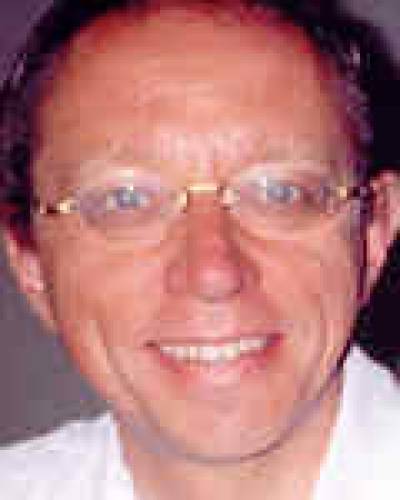 GENERAL:I write for professionals as well for amateurs for every instrumental combination in different styles. There are tonal pieces, arrangements and new contemporary works.

MUSICAL EDUCATION: I first came in contact with different kinds of music in my own home. Took piano- and recorder lessons and started improvising as early as then, and composed short pieces. I was in grammar school when I experimented with a.o. pop music in order to make music in a more creative way. I wrote pieces in mixed style with elements from classical and pop music.After grammar school I studied at the Lemmens Institute in Louvain where I received a combined diploma in piano(under L. Kende) and Music Education. Subsequently I earned my Higher Diplome for Chamber Music from the Royal Conservatory in Antwerp as well as First Prizes in Fugue and Composition(under Willem Kersters).

AWARDS: In 1990, I was awarded first prize in the Belgian Composition Contest for Chamber Music, organised by the Muizelhuis, for the work "4 Pieces for cello-quartet". For my "Second stringquartet" I received the tri-annual Jef Van Hoof Prize and the same work made me also Laureate of the Composition Contest of the Belgian Royal Academy for Science, Language and Literature, and Fine Arts. In 2001 I won Awards for the best orchestration with my "Violinconcerto" and "Jace" for orchestra in the International Contest of 'Song Expo' among different musical disciplines like pop, classic and jazz.

STYLE: Like many contemporary composers, I seek points of contact with a musical past which can be the starting point for new ideas. From rock and pop ( the British progrock band Yes is one of my favourite groups ) for instance, I draw the directness with which this music conveys its emotion. I aim to write music that is rhetorical: by means of the parameters of music, I set out to create works with a high degree of expression, where the communication of feelings is not inherent to a particular musical language. I like to compose for cross-over projects in different styles. There are already some 60 works, from orchestral work to solo instrument, from chorus to song, for professionals as well as for amateurs or students.

TEACHER: I'm a teacher Chamber Music and Music Writing at the Music Academies in Antwerp and Sint-Niklaas and was 20 years teacher in the Conservatory of Antwerp. I wrote several pieces for my students and encourage themselves to compose.