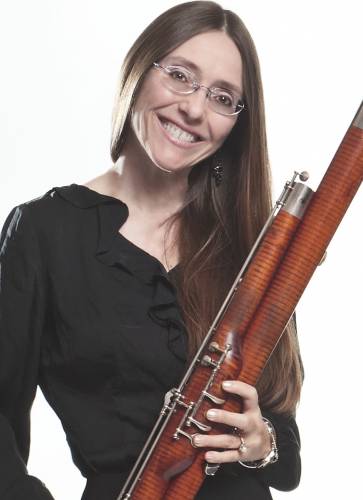 Bassoonist Kathryn Sleeper has commissioned and premiered over 25 works for bassoon, from solo pieces to concerti with orchestra. Reviews of her recitals and recordings are enthusiastic about the music as well as the performances:

"Kathryn Sleeper's playing is every bit as exciting as the piece, and she manages to overcome the extreme level of difficulty of the work like a superhero." Jeffrey Lyman. The Double Reed

"Together the two pieces revealed the extent of the bassoon's (and the bassoonist's!) versatility– By the end the audience and the orchestra alike had been completely charmed" Wayne Dickson. Deland Reporter

While attending SMU in Dallas, she first became involved in performing and recording new music when she joined the ensemble "Perspectives." There also, she studied composition with Donald Erb, Marvin Lamb, and Jack Waldenmaier. During her senior year, she invented a simplified and accurate notation for multiphonics and extended techniques on the bassoon which has been used by several composers. Since graduation, she has performed and recorded contemporary music at concert venues in the US, China, Argentina, Bulgaria, and The Czech Republic. She appears as a soloist on two already-released commercial CDs–Music From Six Continents 1996 (VMM 3037) and The Sentimental Muse (N/SR 1031.) In addition, Kathryn has recently completed recording a solo CD of music for bassoon by composer Thomas Sleeper (plus her "Lullaby for Morgan") which is scheduled for release in spring of 2018. Kathryn is the recipient of several awards, including an American Cultural Specialist grant from the US Information Agency for performances in Beijing and Shanghai.

Kathryn's principal bassoon teachers were Luciano Magnanini, Janet Friedlander and Betty Johnson. She was Professor Magnanini's teaching assistant at the University of Miami where she earned her Master of Music degree. In addition to her degrees in music performance, she holds an AMI diploma for Elementary Montessori Education (ages 6-12) from Fondazione Centro International Studi Montessoriani, in Bergamo, Italy. She is the founder of the elementary program at Casa Montessori DeLand (FL). She is the former principal bassoonist of The Atlantic Classical Orchestra, The Palm Beach Pops Orchestra, The Miami Symphony Orchestra, The Florida Space Coast Philharmonic, and The Richardson Symphony Orchestra. She is currently Bassoonist/Contrabassoonist with the Naples Philharmonic, (Naples, FL); Principal Bassoonist of the Villages Philharmonic Orchestra (The Villages, FL); and Music Specialist at Casa Montessori DeLand.