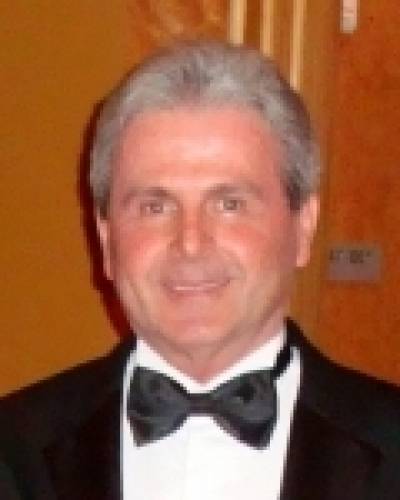 Luiz Antonio Vasconselos Penteado, born 17th Dec. 1943, in Paraguaçu Paulista, SP, Brazil. Graduate in Art Education in 1976, after a period of 4 years in Europe where studied free painting in Cologne, Germany. For 20 years was an Art Education teacher, period when started studying music and piano. Through Andrès Segovia's records met the Bach's music and chose Chaconne BWV 1004 as focus of study and interest. After the analysis of the Chaconne original score for solo violin and of several transcriptions for piano, guitar and orchestra, decided to do his own piano transcription trying to do it close to the original for violin. In 2009 wrote the lyrics for a choral transcription of the Chaconne. These lyrics, written in Portuguese, have been translated to English as a poem. Also, in memorian to Johann Sebastian Bach and Maria Barbara Bach, a german version of this choral transcription is now available in SibeliusMusic. Beside the Bach's music, the author developed also an interest on the brazilian composer Heitor Villa-Lobos (1887-1959), transcribing for piano the Prelude Nr 3 for guitar, which, for reason of copyright, can not be published yet.

To Izaura CHACONNE (A poem inspired by the story of love and loss told by the protagonist through a wordless musical composition. The composer is Johann Sebastian Bach and the music is Chaconne, from the Partita Nr 2 for Solo Violin, BWV 1004, composed in 1720, after the unexpected death of his young wife, Maria Barbara Bach.)

Barbara! Barbara! Oh! Forgive me for my absence. Coming back to home I was only thinking in you. Anxious to see, hear, tell And in your arms to be. So happy,then Give the golden ring I was bringing to you.

Moreover, my John, my dear! For our love Your smooth hands In my face I felt. Oh! At my last hour, I did!

The happiness, yes, I met By finding my love, Love of an angel who From the heaven fell well close to me. Instead of wings, God made him hands Well in the measure of the keyboard, A pair of ears so in tune, A great heart that pulses, Beats the time And, with emotion, feels.

(mm. 35-47) Narrator:- Oh! Arnstadt2, you saw The rising of a romance In the eighteenth springtime Of a girl, a beautiful soprano voice, And a genius of music, The angel to whom God said:- God:- Look, John Sebastian, Look at that blue point Far in the Universe. It’s the Living Earth Where you will find A thousand of instruments. A great one, the organ, Of long pipes and keyboards done. Those of wind, others of strings Bowed or beaten. And at last my favorites, With a membrane, By the lung air vibrated. They are sublime, human, enchanting. So, for this mission, At your disposal they will be.

(mm. 48-63) John:- How beautiful is the human voice, The voice about which someone said: With the reason Through the hands developed3. Blessed hands! Blessed and strong also is the love That all wins, The death and pain. My love, your love, the Great Love!

John:- Marry you My only dream has been!

John:- Whom should I ask for your hand?

Barbara:- As I have not parents anymore, You can ask God, Our Father, That for sure He will say yes!

John:- Yes! Yes! So, we can marry! The wedding feast, then, prepare! There! There! For nothing will lack in Dornheim4. The guests, the godfathers, The dress, the morning coat, The roasts, the beer, The cake, the wine and, At four voices, the Quodlibet5 Accompanied by the violin, Cheers, claps, the bouquet!

(mm. 76-83) Barbara:- As sweet and happy are these days For sing, smile, dance and Feel the magic emotion of love, Love and love again. My heart showered With springs of loving care.

Hear! Hear my little ones Singing here and now! Feel of this moment The intense vibrancy! Dance with me This Chaconne6 of love! Tap-dance! Clap hands! In this gipsy trance!

God, My God. I’ll talk to You. I thank You for the gift You entrusted for me And all that You gave me, But I want to give them back, As I can’t anymore pay the price That to me is charged, For, if nothing or a little costs Of this music the creation, The inspiration, Done of death and pain, For me heavy is too much.

Oh! Insatiable and cruel Muse! One by one, My beloveds you mow down!7 Who will teach you compassion?

Can my human conscience to perceive, But does not understand the incongruity Between the tenderness of this gentle melody And the torment that suffers My soul here at this moment, In a crescendo without measure, With no rest, no help nor witness, At the limit of the reason and lucidity, A fierce vortex trembles And unbalances the Firmament. I shout: God! Where are You That I don’t see? Where are You, God? Why You don’t answer me? Where are You, God? What has become of Your Infinite Omnipresence? Lack me air, lack me light! Where am I, God? Doesn’t help me Your Infinite Omnipotence? What an angel am I If nor myself I can succor? Is it worth to be your son If me You abandon? Strong claws catch my heart And pull me into the chaos!

John:- Angel of Evil, but who are you?

John:- And with me what do you want?

Beelzebub:- I want your talent!

John:- Barbara! Help me your love!

Barbara:- Get back! Beelzebub! In the name of the love Get back!

Beelzebub:- Damn you too!

Barbara:- In the name of the love I will triumph over you!

Barbara:- In name of the love, Of the God of Love, Over the evil I know that Always triumph do I will!

(mm. 176-183) Narrator:- No! There is not a greater power than this Once created by the Law of Love, Of the Great Love that in an Whole Joins the stars, the creatures, us and God.

(mm. 184-199) God:- John! O! John! Here I am To say the Father didn’t leave you. Me in you, you in Me, That is My simple definition. But, remember, the union Always has the condition Of love and forgiveness. And more, driven I am by your prayer.

(mm. 200-207) Narrator:- Lauded be the conjunction of the Universe, The light of the sun. Lauded be the voice, the hearing, Lauded be the sound, the gift. Be lauded John Sebastian. Of the mankind the emotion, The dance, the body, The life and its vibrancy, The conscience, the unconscious, The faith, the peace, The saints, the truth, The love and compassion.

(mm. 208-225) John:- Barbara, this Chaconne is for you, For everything that you mean to me, For everything that we lived. Thirteen years are of love and pain, Of your help and fondness, And, much greater than a life side by side, It was, it is a so real dream That I can’t and I don’t want to wake up, For with you to ride by the ways of Eternity, Listening to your voice at this cadence, Accompanied by sounds of the Divine Music of which, grateful, I am a small, but diligent apprentice, In the hope that, then, I will compose No more impelled by the pain, But only, so only by the love For my sweet Barbara, My peace, my flower, Who saved me from the Evil, My light, my air!

1 Christian, Leopold and Sophie: John Sebastian Bach and Maria Barbara’s children, died at very tender age. 2 Arnstadt: German city where John Sebastian Bach and Maria Barbara met in 1703. 3 Theory that explains the development of the language and reason through the making of tools, i. e.: the man as “tool making animal” in a definition ascribed to Benjamin Franklin. Also, the hand has been called by Saint Thomas Aquinas as “organum organorum” (organ of the organs). See Fischer Ernst, Von der Notwendigkeit der Kunst, pages 22/23, Verlag der Kunst, Dresden, 1959. 4 Dornheim: little city next to Arnstadt where John Sebastian Bach and Maria Barbara married in October 17th, 1707. 5 Quodlibet: “improvised choral music with cheerful texts and alternated melodies” composed by J. S. Bach (BWV 524) for his wedding feast. See Rueb, Franz, “48 variações sobre Bach”, page 91, Ed. Companhia das Letras, São Paulo, 2001. 6 Chaconne: type of musical composition and dance, popular in the baroque period, emerged during the late sixteenth century in the Spanish culture. 7 The death was constantly present in the life of J. S. Bach, as the loss of his parents when he was ten years old, his brother, his children and his wife. 8 This poem is a free translation of the lyrics, written in Portuguese and German languages, to a choral transcription of the Bach’s Chaconne – BWV 1004, 5th Movement of the Partita Nr 2 for solo violin. The choral transcription can be found in scoreexchange.com