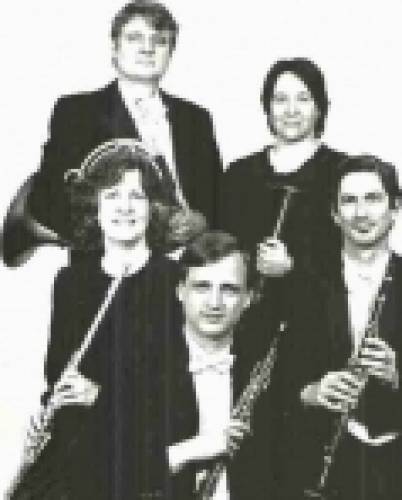 129 Original Woodwind Quintet Transcriptions Now Available - Including (but certainly not only) two Christmas Music Suites for the holidays and also the entire opera, "The Magic Flute".

When you have made a video or a recording of one of our pieces that you are particularly proud of, please upload it to YouTube or another site and send us a link to it so we can share it with the many users who would be interested. Send the link in a message to sales@lindenquintet.com.

The Linden Woodwind Quintet was founded in 1974 by five musicians who were then attending the Manhattan School of Music. The group was originally named the Caloroso Quintet. The members thought the name meant, "warm and passionate", but one time an audience member remarked that it really meant "hot and sweaty", so the group had to find another title. Someone came up with the idea of naming it after the linden tree and that is the name it has been ever since. One of the main reasons for getting the group together was to play on the streets of New York for money. Members played outside what was then the Hallmark Card store on 56th and Fifth Avenue most of the summer nights that year. The location had decent acoustics, excellent lighting and a lot of people going by, so it was a popular place to play for the Quintet and other groups. A musician could perform for three or four hours and come home with the munificent sum of $30 or $40 for the night. There were also other advantages to playing there. Many of the passersby would stop to listen, like what they heard, get to know the members and hire the group on the spot to play for parties, weddings or other special occasions. People in the group soon realized that a big problem was that there wasn't really a lot of fun and interesting music for a woodwind quintet to perform, both for the players and the listeners. There were a few arrangements and a number of pieces originally written for woodwind quintet such as those by Reicha or Cambini, but the pickings were pretty sparse. Around that time the movie, "The Sting" was released. The film used a lot of the rags of Scott Joplin and there were soon a few arrangements for sale of popular rags, but we felt that many more should be made available. One of the players (either Mitch (clarinet) or Bill (oboe)), came up with the idea of arranging a piece to add to the repertoire. It was a success and that started the process of all the members of the quintet making arrangements. Nearly everyone in the group was soon doing pieces for numerous occasions. Often, when an individual would hire the quintet to play at a wedding or a party, someone would comment that they just loved Mozart or Sousa or the Beatles and could we do such and such a piece? We'd say, "Sure", and then someone would go home and arrange it specially for the event. Also, often when playing on the street, someone in the group would come in during the night and announce that they had transcribed something new and we would play it on the spot. Some of the arrangements were used just one time and never played again. Many other times, the group would play the piece, realize that it was a great transcription and it would become part of the group's standard repertoire. At all times we could gauge how good the piece was by the audience's reactions to it. Sometimes we would have a large crowd around on a street and get finished with a piece and then see a torrent of quarters, a flurry of dollars and a few five dollar bills flying into our open case. When that happened, we knew the piece was a winner and it would become a part of the working repertoire. One time we tried to do an inventory of pieces and counted close to 400 of them. Many were not that good and quite a few, such as pieces by the Beatles and George Gershwin, are still in copyright, so most likely we will never publish them. We have decided that of the 400 there are about 250 that are worthy of publication. The group played on the street for, perhaps, three or four years during warm weather months. There must have been hundreds of people who played with the group during the years, subbing for the original players when they were busy working elsewhere. Everyone had to be an excellent sight reader, not only because of the many different pieces we played, but many of the members creating the arrangements had nearly indecipherable handwriting. Sometime during these years, the group caught the eye of the late Edmond Karlsrud, who booked various musical groups on tours throughout the country, usually under the auspices of Community Concerts. He auditioned the group, said he would like to use us, but could not for the next few years or so because he booked concert tours years in advance. Everyone kind of forgot about it for the time being. Soon after that, it so happened that one of Mr. Karlsrud's groups had a last-minute problem that made them unable to make their tour. He called the Linden members and asked if they could do a tour on just a few day's notice. They said, "Yes", and that started 12 years of tours with the quintet throughout the USA and Canada. Today, our members are all busy professionals playing in major New York City orchestras and shows. We don't get together as often as we'd like, but when we do, we play and enjoy the repertoire first created for our street playing days long ago. If you like what you see here, please go to www.lindenquintet.com, where we have nearly 100 more pieces of all types that are on sale right now