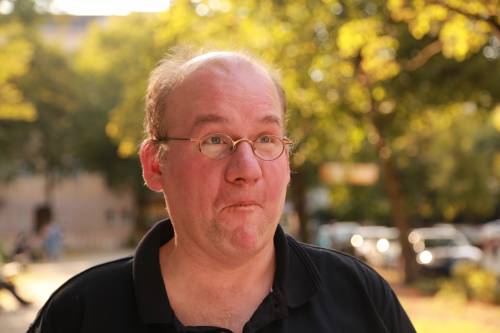 Manuel Rösler was born in 1972 in Aachen and at the age of thirteen gained his first experience as organist and choirmaster in his native Rhineland.

Already during his studies he was a member of a number of renowned vocal ensembles, including the Rheinische Kantorei (Hermann Max), the Kammerchor Stuttgart (Frieder Bernius) or the Collegium Vocale (Ghent). Master classes with Frieder Bernius, Carlo Maria Giulini and the Hilliard Ensemble completed his training. In addition, he was a founding member of the choral academy of the Schleswig-Holstein Music Festival, which was founded in 2002. Concerts and recordings have taken him to festivals in Europe, Asia and North America.

As a composer he has been working since 1997 for TV shows like the ARD Wunschkonzert, RTL Samstag Nacht and Switch! and also provided a series of feature films with music. In 1999 he developed together with Yvonne Adelmann the successful radio play series "Point Whitmark", for which he also wrote the music and recorded with the National Radio Orchestra Minsk. The first ten episodes of the mystery series "Gabriel Burns" not only owe him the iconic title tune (with Hans Paetsch as the speaker), but also the orchestral soundtrack, which he recorded with the Cologne Film Orchestra founded by him.

For his music to the Edgar Wallace radio drama "The Indian cloth" he received the 2003 "Radio Play Award for Best Music" and was repeatedly honored for his compositions in the following years. In 2005, for example, he won the composition competition for the Berlin Cathedral. His music is published by Berliner Chormusikverlag, Ries & Erler and Edition Peters.

In 2005, after a project at Konzerthaus Berlin, he founded the Berlin Children's Opera, which he still heads today. From 2006 to 2008 he headed the Music Theater with Children and Youth section of the Sing-Akademie zu Berlin. From 2008 to 2010, he worked in addition to his freelance composition work as a lecturer for lied interpretation at the Theater Academy Vorpommern and as an acting musician at the Vorpommerschen Landesbühne Anklam. Since 2010 he is working again as a church musician and works as an arranger and composer for theatre und film.