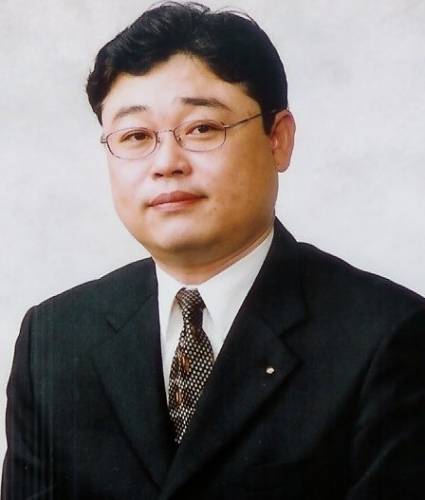 I was born in Nagoya in 1964. I spent a boyhood in Chigasaki that is called "Shonan" until I graduated senior high school. Chigasaki is a summer resort that is the most famous in the suburbs of Tokyo. In addition, Chigasaki has the very beautiful seaside.

At that time, I liked to draw oil painting and belonged to art club in my senior high school days. I just only enjoyed to listening to music while drawing pictures. I liked the opus of Beethoven and listened to almost his music.

After having sent pleasant senior high school life, I lived in Hachioji of Tokyo in order to study an international public law at Soka University. Six years later, I could get master's degree.

During my university student days, I enjoyed drawing pictures as ever. And I met Mr. Kanakubo who became an especial friend. He was too a member of our university art club. Our good friendly relationship continued for a long time till he died.

Therefore I thought about what would be a pleasure most for him. Then I began to compose music for him, educating myself, for the first time. And then, I often went to his home in Yokohama whenever I made a new opus.

After he listened to my music, he said to me, "Probably, nobody feels good your melody because you do not know well the theory of music" . He taught me basics of music theory immediately. I studied music hard from then on.

However, he died peacefully in the next year. And he was seen off at the funeral service by many friends. When I met him last, he said to me, "I want you to become a true composer."

Time of ten years passed after starting music composition. I continue working on composition now since I finish work every night. I wish to give every people courage and hope and an ease through my opus.

My work relates to city maintenance administration at Nakano city office in Tokyo.

I hope you will enjoy my music.

Piano
THEME OF THE SMOKE TOWN
A Waltz of a Kitten ( Piano )
A Tear in the Evening Darkness
Autumn in " KYOTO " , Japan ( Piano )
A Theme of Micheal ( Piano ) a white kitten in my home
The Heart Beating with Love
Blink away your tears looking up into the night sky
An Omen of the Awakening
Departure for New Hope
Earth "Tanzania" of Happiness
High waves of the winter
Eternity Capital, "Nara" in Japan ( piano )
Hello! My Daughter (E-Piano)
The Gate of the Labyrinth
The Sky of the Early Summer Breeze
Like sunlight after rain
I love you to the last
The Landscape in Her Hometown, "Toushoukaen"
Waltz for the Ball in the Spring
Mikoshi
My wife, a Theme of Misako
Sadness of my Heart
The floral art of the frangipani
The Spring of the Cat ( E-Piano )
A Dance of Brave Man Kento ( Piano )
The Theme of a White Kitten named "Megu" (Piano)
Orchestra
The Breath of Life
A Dance of Brave Man Kento ( Orchestra )
Eternity Capital, "Nara" in Japan ( Orchestra )
A Waltz of a Kitten ( Orchestra )
A majestic figure of BMW running at full speed on the Highway.
A Theme of Michae ( Orchestra ) a white kitten in my home
Prologue
INAZUMA
Coming of Spring (Orchestra)
Autumn in " KYOTO " , Japan ( Orchestra )
The Passing of Our Great Professor
Hello! My Daughter (Orchestra)
The Spring of the Cat (Orchestra)
The Theme of a White Kitten named "Megu" (Orchestra)
Summer Night of the Hometown
Others
Dewdrops in the morning
Seaside Cool Breeze
Coming of Spring
A Lullaby for Baby of the Cradle
The Odyssey of the Kitten
ScoreExchange.com is run and owned by ADAP Solutions Ltd. ©
Sell sheet music |
Terms | Privacy |
Contact us | Advertise | Help