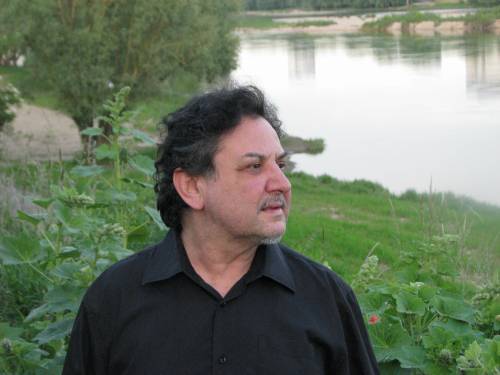 Melo Mafali, a short biography 1958 Born in Messina, Italy, on the 6th of February .

1970 Classical piano lessons at the Conservatorio A. Corelli.

1979 Degree in classical studies at the Liceo Classico Maurolico in Messina.

1980 Melo begins as a jazz pianist, with a very special debut as an opening act for legendary drummer Max Roach, at the Messina Jazz Meeting.A six months tour with the avantgarde theater group Gruppo 5.

1983 He's working as a professional musician, arranger and programmer in Germany.

1983-86 Arranger and composer for different artists, among others Chaka Kahn, lnterface, Delegation, Off, Tina Charles,Mousse T.,Nena mostly at Cream Studios in Frankfurt a.M.

1987 1st Cologne Rock Meeting with 10.000 in the audience and a major national broadcast, with W.Niedecken of Bap,Trio Rio and Counting Crew.

1991 First european tour with soul music veteran Rufus Thomas, with whom he also records the albums Timeless Funk and Blues Thang, in his own recording studio,Peak Top,Cologne. Melo also writes and produces the music for the show Visions of Orientalia, an idea of choreographer and middle-east dancer Aida. This show had its premiere in Cologne,Germany, with a considerable success of audience and press.

1992 Second european tour with Rufus Thomas, with a live gig on MTV's Most Wanted, with Ray Cokes. Melo is a founder of the Aton Music label, through which he can promote his first solo album, Babylons Acumen.

1993 Recording his first solo piano album EI libro de La Luna. He is a founder of excellent soul-rock band What's up, with an SPV album release.

1994-95 Release of Aida's Mythos, a visionary M.Mafali album with middle-east sonorities. The band What's up has a firm tv appearance. The best gig is live with the Pointer Sisters in the popular late-night show Samstag Nacht,with comedian Harald Schmitt.

1996-97 Release of major tv and cinema spots (Opel, Warsteiner) with Melo Mafali's originals. First What's up tour in Spain. Recording tracks with Rufus Thomas at the legendary Sun Records studio in Memphis, Tennessee. 1997-2004 Release of three albums with the Pianoduo, working with the Spell Trio on an album, and on the experimental Aton Project.

2004-2007 New compositions for piano and works for classical orchestra. Also working at a major concept as arranger-conductor for metal guitar icon Wolf Hoffmann of Accept fame.

2008 Music for the italian Movie "un Amore di Gide", directed by Diego Ronsisvalle, with Olivia Magnani, Alessandro Haber, Mariano Rigillo. A soundtrack album out in the stores in Autumn 2008 for Warner.