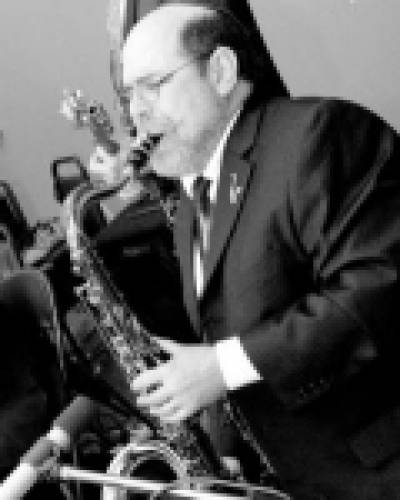 Mikel has been playing clarinet since 1958, then he took on sax, piano, accordeon, and in the 1960s played guitar, bass and piano in "the Living" and in High School Band he played bass clarinet next to Billy Crystal (who was on contrabass clarinet). He also played sax and string bass in jazz band, and various winds in the pit for shows and even joined the chorus for a while, until he was asked to "move your lips - but don't sing".

Mr. Estrin's first single(45RPM) in Greece went by largely unnoticed, though the band "Boorboolia" had regular gigs at several clubs nightly… where he played flute and harmonica and kazoo, with some Klarino. He played flute on many studio recordings at Lyra and EMI, as well as with Sidiropolous, Poulikakos and Savopolous.

He followed his heartthrob to Paris where he studied Asian musicology at the Sorbonne, and electro-acoustic music at the Conservatoire National Superieur. His first commission was a tone poem for big band "Lefki" broadcast on France National Radio, and he subsequently joined the SACEM as Associate Member, Composer, – and then qualified for Arrangeur as well. He wrote lyrics on the Chantal Curtis hit LP "Taxi Girl" and his score for the short film "El Desdichado" with Antoine Grimaud and Pierre Jouvet won a prize at the Electronic Music Festival at Bourges, France

Mikel played clarinet in the Jazz Workshop with Steve Lacy at the American Center in Paris, as well as a wonderfully bizarre new year's eve gig as a duo… and a happening at Bataclan. He busked around Europe, serenaded diners on his mandolin, started a guitar class in a French engineering college, and was music director at the restaurant in the Eiffel Tower.

Theatracide, Puck & Puke & Co Show, Radio Show, La Compagnie du Ruisseau, Le Grand Nebuleux, Elvis Platine & Charivari were all shows which had a thick dose of this Estrin's humor and haunting melodies. Renaissance Faires in Boston, New York, and around the country had him performing with belly dancers, medicine shows, snake charmers and hucksters from the Bowry to Lincoln Center

After a stint as international liaison for Music Minus One/Inner City Jazz, as well as with APIA, and he returned to the US in 1982 to study computers, worked as Director of Marketing while moonlighting as a videographer with Delmar Studios. He moved to California in 1986 and played with fellow multi-instrumentalist Clark Welsh in a Greek band "Taverna".

Both of them would continue playing music in various venues for the next 20 years… playing Greek festivals all around the Bay Area, and in a wide variety of musical styles and instruments. They co-founded the San Francisco Balalaika Ensemble in 2002.

Passport Designs, one of the original music software companies brought Mikel in as a regional sales manager in 1987, and there he quickly moved up to become the Vice President of International Sales & Marketing. He led seminars and organized training and localization of computer assisted notation including SCORE�, Notewriter�, and Encore� which he helped to mold, and he requested be chopped down and offered as Music Time� which became one of the top selling music programs around the world.

Mikel also played klezmer music on mandolin, clarinet, trombone and percussion in many ensembles including Ellis Island Folk Band, and with Achi Ben Shalom in Adama and the Beyt Tikkun Band.

Mikel is featured on the new CD release "Journey To Shabbat" with Cantor Rita Glassman. Currently, Mikel continues playing, composing, arranging and recording in the San Francisco Bay Area, with his lovely wife Diana and their Dr. Seuss-esque dog: Bongo.