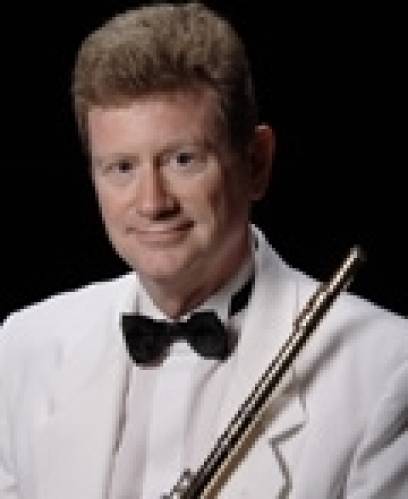 Monty Adams received a M.M. in flute performance from Northwestern University in l996 and was the recipient of the Eckstein Prize and Nichols Award. He studied flute with Julius Baker, Harold Bennett, Kenneth Emery, Walfrid Kujala, James Pappousakis, Donald Peck, and Albert Tipton. He also studied conducting with John Paynter, Paul Aliopoulis, and Mitchell Arnold and conducted the flute choir at Northwestern University.

Monty joined the faculty of the Music Institute of Chicago in 1996 as a flute teacher and chamber music coach. He has been the conductor and music director of the Lakeside Flutes since 2001, and also conducts the Ridgeville Band of Evanston.

Monty has performed with the Chicago Symphony Orchestra, even substituting as principal flute at Ravinia and Orchestra Hall concerts, and performed as a regular member of the several Chicago Symphony chamber ensembles for over 20 consecutive years. Prior to returning to Chicago in 1981, he was the principal flutist with the U.S. Air Force Band and Orchestra in Washington D.C. under the direction of Arnold Gabriel. As soloist with the Air Force Band, Monty performed at the White House for Presidents Carter and Reagan.

Today in Chicago, Monty is often called to perform with the City Lights Orchestra under the direction of Rich Daniels. Also, Monty performs regularly with his wife, Phyllis Adams, in a flute and harp ensemble for major social and corporate events. The duo is recognized for their innovative flute & harp transcriptions. They produced two CDs together, Opera by Request and Universal Peace. Monty and Phyllis were featured at the 25th National Flute Association convention in Chicago, and their music was featured on "All Things Considered" on National Public Radio. Their recordings are frequently played on leading classical radio stations across the country.