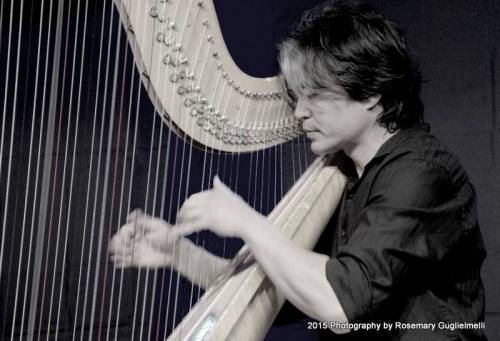 Born in Matsuyama City, Japan. He started his musical training on the piano and also the guitar. In Tokyo he played the acoustic and electric guitar in professional Jazz bands and the Swing Journal magazine described him as “one of the most remarkable young Jazz musicians.”

In 1997, Mr. Kosako moved to the United States and soon after he started playing the harp. He is primarily self- taught with a few lessons to learn fundamental harp technique.  He was the principal harpist of Stockton Symphony Orchestra in California between 2005-2010 and the featuring soloist for 2009-2010 season.

His latest music innovation is improvisation and composition for the harp. In 2007 he won the second place in Lyon & Healy International Jazz & Pop Harp Competition and received the “Best of Sacramento” award from Sacramento Magazine as “Best Jazz Hound in Tie and Tail”. Sacramento Magazine says, “Kosako plays with fluid, modern style that evokes Keith Jarrett and Chick Corea.” His groundbreaking style is also noted in Harp Column as “Motoshi Kosako, a Japanese native whose introspective soloing was reminiscent of Keith Jarrett.” He plays numerous original compositions and standards as solo or in trio and quartet. Since 2008 he started touring internationally to give performances and various workshops and he is considered as one of the most influential Jazz harpist in the world.

He tours internationally to give concert, lectures and workshops. The numerous music festivals he was invited are including “The future of harp in Yokohama” in Japan, “VIII Rio Harp Festival” in Rio de Janeiro, brazil, “American Harp Society National Conference 2014” in New Orleans and “World Harp Congress, Sydney 2014” in Australia. He performs improvisation and original compositions as solo or in ensembles with top jazz musicians including Grammy award winning reeds player, Paul McCandless, master acoustic bassist, Bill Douglass, innovative electric fret-less bassist, Michael Manring and eminent jazz guitarist, Akio Sasajima. He released 2 classical solo albums in 2002 and 2003, and 9 jazz albums between 2008 and 2016.

In 2008, he joined NPO holistic health research group in Japan (Total Health Research Group) and began conducting research projects involving sound healing and practical application of music to occupational fields for the promotion of health. In 2012 the  public medicine professional journal, “Science of Public health” in Japan published his research article “Total Health and Music”. He holds a B.S of health science and nursing, and is a registered nurse and public health nurse.