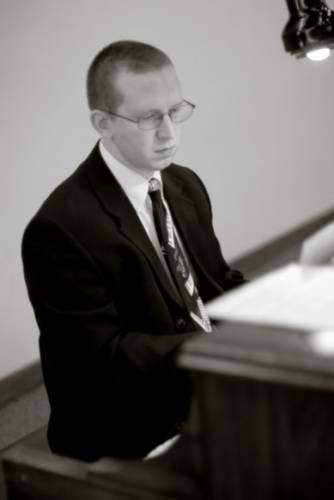 I started at St. Catherine or Siena Church as an organist for the weekend masses in 1991. Since that time, I became the accompanist for the Youth Choir, the Adult Choir, choir director, and as of July 2009, director of music. I have debuted many original musical works at our church, including settings for "Ave Maria" and "For the Beauty of the Earth," several instrumental pieces performed during the Christmas and Easter seasons, and parts of my mass, "Missa Benedicta," named for Sr. Benedicta Berendes IHM, my music history teacher at Marywood University.

I graduated from Marywood University in 1999 with a BM in Music Education and was awarded The Sister M. Clare Kelley Medal for Excellence in Music. In 2007, I received my MA, also in Music Education from Marywood. In addition, I have studied music technology courses during the summers at Villanova University and online through the University of Colorado and have completed my TI:ME (Technology Institute for Music Educators) certification. My TI:ME instructors have included Dr. Tom Rudolph, Dr. Floyd Richmond, Dr. John Kuzmich, Ken Peters, and Mike Fein. I have taught various music and technology classes at Marywood University's Vivace Music Institute (formerly known as the Summer Music Camp) since 1995.

I write and arrange music for concert band, jazz band, percussion ensemble, and choir. I have also written a mass setting to go along with the changes in the Roman Missal.