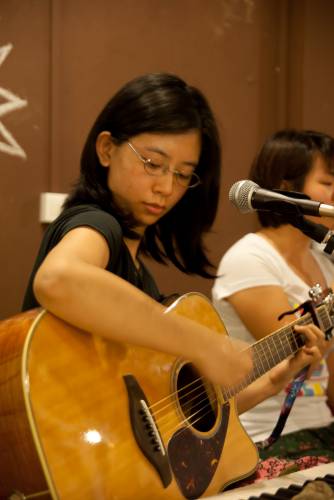 That's a word that describes Narisa perfectly. In her songwriting and production work, Narisa has constantly challenged herself. Narisa began songwriting at the tender age of 10 and is influenced by every genre of music from Chopin's nocturnes to the distortion guitars of Linkin Park.

Her earliest works were merely scribblings but as she grew musically and began to apply the principles of classical composition to her favourite radio hits, each song grew into complete melodies and harmonies. The skillful blend of evocative counter-melodies and emotional lyrics is the bedrock of Narisa's music.

Narisa's songwriting encompasses diverse genres including alternative-folk ("Fight"), sunshine pop ("Valentine's Day") and even Mando-pop ("无畏"). She never ceases to seek new learning opportunities to develop and improve herself, from conducting her local church choir to playing keyboard for fellow musicians. Narisa incorporates each new experience into her repertoire of eclectic pop-rock to suit every occasion.

Chinese Songs
wúwèi (fearless)
情歌(qíng gē)-Love song
刺伤爱情的下次(Next)
You are everything
English Songs
Fight
Goodbye
Fond Farewell
I’d rather be
Don’t Care
This Way
In Time
Listen
Unrequited
R&R
Price of a Burden Emptied
Conversations on the 151
Valentine’s Day
The Necklace
You are to me
Pay Back
Kiss me goodnight
Smitten
What is the point?
Instrumental Songs
Mwahaha
Endurance
ScoreExchange.com is run and owned by ADAP Solutions Ltd. ©
Sell sheet music |
Terms | Privacy |
Contact us | Advertise | Help