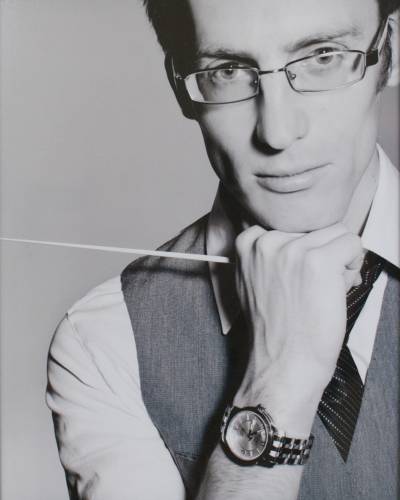 Nicholas Buc is a composer, conductor, arranger, violinist and pianist. He studied Composition with Brenton Broadstock and Dr. Stuart Greenbaum at the University of Melbourne, where he received the inaugural Fellowship of Australian Composers Award. He is also the recipient of the Brian May Scholarship for Australian film composers, which will see him undertaking a Master’s degree in Scoring for Film and Multimedia at New York University in September 2014.

Nicholas is regularly commissioned and some of his works have been premiered by the Royal Melbourne Philharmonic Orchestra and Choir, The Australian Voices, the Melbourne Chamber Orchestra Virtuosi, the Benaud Trio and Concordis Chamber Choir. He has also written for film and television, with some of his work being screened at festivals and theatres around Australia, Asia and the US. In 2007 he was nominated for "Best Original Song Composed for the Screen" in the APRA-AGSC Screen Music Awards.

He has been adjudicator of the Original Composition sections at the Dandenong Music and Arts Festival and the South Eastern Arts Festival, as well as Musical Director for Windmill Theatre Company, receiving both a Lyrebird and Music Theatre Guild nomination for Best Musical Director.

Nicholas has worked with Tina Arena on her last six Australian tours, writing new orchestral arrangements and conducting the Sydney Symphony, Queensland Symphony, Adelaide Symphony and West Australian Symphony Orchestras in sell-out performances. The culmination of this was the live concert album Symphony of Life, which screened on the Ovation channel on Foxtel and was nominated for an ARIA Award for “Best Original Soundtrack/Cast/Show Album”. He has also written arrangements for The Whitlams, Passenger, Stu Larsen and Ben Hazlewood, as well as working on the first two seasons of The Voice Australia.

Continuing his passion for music and film, in 2010 he conducted the Sydney Lyric Orchestra in Bernard Herrmann’s horror masterpiece Psycho, which was performed alongside a screening of Hitchcock’s classic film at the Sydney Opera House. He reprised this role with two encore screenings as part of the 2010 Melbourne International Film Festival at the Regent Theatre. More recently he has enjoyed great success with Disney’s Pixar In Concert, conducting the Sydney Symphony, Hong Kong Philharmonic, Evergreen Symphony, Tasmanian Symphony and West Australian Symphony Orchestras, and will bring the show to Adelaide and Malaysia in 2014.

In 2009 Nicholas was commissioned to write an hour-long cantata mass for the centenary of the death of Mary MacKillop, and 2008 saw the premiere of his Requiem Concordia, commissioned by Concordis Chamber Choir to mark their 10th-anniversary. After a string of infamous pop covers, his long-standing affiliation with the Benaud Trio culminated in a new commission, Trailer Music, which has been released on their debut album through Melba Recordings. He has also completed two major choral and orchestral commissions - Festival Te Deum and a new Gloria - for the Arborlawn United Methodist Church in Fort Worth, Texas.

He is currently completing work on two major theatrical works. TROT, written with lyricist Gordon Lindsay, is a new musical based on Charles Dickens’ much loved David Copperfield. The other work, Kazka, is a new ballet based on Ukrainian folk tales, which will be performed by Lehenda Dance Company in 2014 before travelling to Ukraine and other destinations abroad.