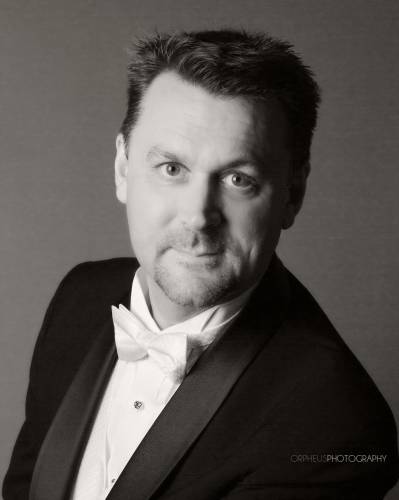 Nicholas White’s musical career has evolved over a period of twenty five years spent in the United States. He is a Grammy nominated composer and conductor, as well as a versatile organist, pianist and singer with experience in many different styles of music. In 2011, Nicholas was appointed to the post of Director of Chapel Music & Organist at St. Paul’s School, Concord, New Hampshire. In 2012 he became Chair of the Arts at the school. In 2013 he was appointed Music Director of The Boston Cecilia, one of America’s oldest and finest performing arts organizations. Recent engagements with The Boston Cecilia have included a critically acclaimed performance of J.S. Bach's Mass in B minor at New England Conservatory's Jordan Hall, taking place on the anniversary of Bach's birth; a "mesmerizing" performance of Maurice Durufle's Requiem; and the Boston premiere of White's own work for soprano, choir, strings and organ - From Earth To Heaven - which featured the Lydian String Quartet. Upcoming performances include Dvorak's Mass in D, Janacek's Otce nas (The Lord's Prayer), Bernstein's Chichester Psalms, Tavener's Ex Maria Virgine and motets by J.S. Bach and other German composers.

Nicholas has given many performances throughout the United States, and has a steady stream of commissions from musical organizations across the world. Immediately prior to his appointment at St. Paul’s, he was Artistic Director of Joyful Noise (Chorus Angelicus & Gaudeamus), a choral organization based in Northwest Connecticut, and Organist & Choirmaster of St. John's Episcopal Church, Beverly Farms, Massachusetts. Nicholas was born in London, England, and received his early musical training as a treble chorister. He held his first organist and choirmaster position at the age of fifteen, going on to become Organ Scholar of Clare College, Cambridge, from 1986-1989. Since coming to the U.S. in 1989, Nicholas has held various positions in churches, colleges and schools. These include Washington National Cathedral (Assistant Organist & Choirmaster), Cathedral Choral Society (Keyboard Artist) and Woodley Ensemble (Music Director) in Washington, DC; St. Michael’s Church (Organist & Choirmaster), Dalton School (Choir Director), Columbia University (Adjunct Organist) in New York City.

In 2003 Nicholas founded Tiffany Consort, an ensemble of eight accomplished singers. The group's first CD, "O Magnum Mysterium" was nominated for a Grammy, and the second CD, "In Sure and Certain Hope: Choral Music of Nicholas White", was released in December 2006. Both recordings are available on the MSR Classics label. Tiffany Consort will begin a new period of activity in March 2015, presenting a concert for Dumbarton Concerts (Washington, DC.) This concert will feature works by Bach, Tallis and Allegri, alongside White's Kyrie on a Theme of Albinoni, written for Dumbarton Concerts fifteen years ago, and a brand new commission for six voices and cello entitled My Mother's Shadow, based on the fourth cello suite of J.S. Bach, upon whose birthday the concert will take place.

White's all-Bach organ recording – “The Amsterdam Bach” – is available on the Pro Organo label. His recorded work is also represented on the Gothic, Raven, Meridian and Gamut labels. Nicholas is an active and critically acclaimed composer, with music published by Hinshaw, Trinitas, Biretta, Augsburg Fortress, Mark Foster and Oxford University Press. His large-scale work for solo soprano, chorus, organ, brass and percussion -"Magnificat" - was premiered at the National Cathedral in 1997, and was performed in a newly orchestrated version in May 2009. Other large-scale commissions include "Full Freedom", a piece for multiple choirs, instrumentalists and dancers, written for the annual choral tribute to Dr. Martin Luther King, Jr. in January 2002 at The Kennedy Center (Washington DC.) Dumbarton Concerts (Washington, DC) commissioned White’s 2013 setting of Poe’s “The Raven” which received great critical acclaim, and will be receiving multiple performances on a Halloween tour in October and November 2015.

Not a stranger to the world of musical theatre, Nicholas recently completed a dramatic song cycle, On Dreams Alone, which has been in preparation for the last two decades. This work for five soloists and chamber orchestra is slated for performances and a recording in 2016. Other works in this vein have included settings of Edward Lear poems and a five movement oratorio, Rochester, which will be premiered by the Granite State Choral Society (Rochester, NH) in March 2015.

Sacred Choral
Blessed Absalom
The Third Song Of Isaiah
There is a Balm in Gilead
Jesus, Glorious Prince of Angels
As Newborn Stars Were Stirred To Song
Solo Vocal
Secular Choral
The Owl and the Pussy-Cat (Choral Version)
The Jumblies
Going Home
The Lord Is My Shepherd
Tomorrow Shall Be My Dancing Day
The Owl and the Pussy-Cat (Solo Version)
My other music
From Earth To Heaven
The Music Makers
They Cast Their Nets
ScoreExchange.com is run and owned by ADAP Solutions Ltd. ©
Sell sheet music |
Terms | Privacy |
Contact us | Advertise | Help