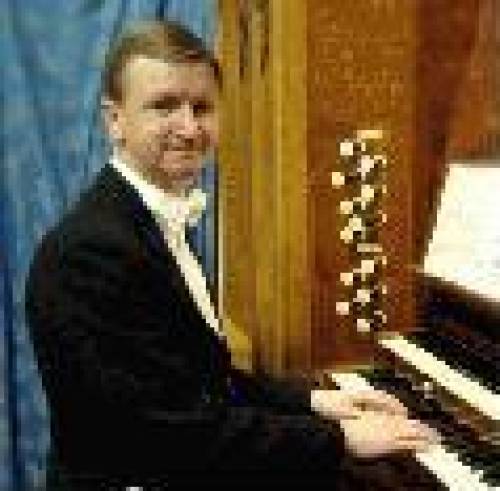 Nigel Nash came to Bristol to read Music at the University and was awarded the Napier Miles Music Prize for his performance in the Part I exams. He studied the organ with Garth Benson and David Pettit and accompanied various University choirs. He was also heavily involved with the University Operatic Society for whom he conducted 'Die Fledermaus' and 'Carmen', and was MD of a musicals revue "Over the Rainbow" which was performed at the Edinburgh Fringe Festival. In 1979 he was the Musical Director for the national tour of "Romeo and Juliet" by the British Universities Shakespeare Company.

He now teaches organ and piano at Badminton School in Bristol and Millfield School in Street, where he plays for the regular school services in Wells Cathedral. In 1995 he played the piano solo in Millfield 's performance of David Fanshawe's 'African Sanctus' at Wells in the presence of the composer and in December 1999 he played the organ there for HTV's Carol Service

He was Director of Music at Westbury-on-Trym Parish Church from 1986 until 1997, and in 1990 he became a Fellow of the Royal College of Organists, with considerable help from Glyn Jenkins and John Bishop. In 1992 the Church Choir & Choral Group made a recording for Priory Records and in 1994 he formed a Girls Choir at the Church. Nigel was appointed accompanist of the Bristol Bach Choir in May 1998 and has played for the choir in many concerts in Bristol, Oxford and Gloucester, and on tour in Paris, Oporto, Prague, Dresden and Iceland. In Autumn 2011 he was acting Musical Director of the choir, conducting them in concerts at St Mary Redcliffe, and St Georges Bristol. He is currently a deputy organist at Bristol Cathedral.

Nigel has been involved with several broadcasts on national radio and television including HTV's Morning Worship, BBC Radio 4's Daily Service, and Sunday Half-Hour on Radio 2, and once came within inches of appearing on BBCtv's 'Casualty'! He has accompanied many choirs and choral societies in the West Country including Bristol Cathedral Choir, Bristol Choral Society, Miscellany, City of Oxford Choir, The Chantry Singers, Organum, Wells Cathedral Voluntary Choir and Nailsea, Chew Valley, Melksham and Axminster Choral Societies. He has given recitals in Bristol Cathedral, St. Mary Redcliffe and in Bristol University's Great Hall. He has performed organ concertos by Handel and Poulenc with the Bristol Philharmonic Orchestra, Bristol Chamber Orchestra and Emerald Ensemble, and has played with the Bristol Philharmonic Orchestra (in the NFMS Diamond Jubilee performance of Elgar's 'Dream of Gerontius' at St. David's Hall in Cardiff) and the London Pro Arte Orchestra in Bruckner's Te Deum at Bristol's Colston Hall.

He has recorded a number of CDs with Miscellany and the Bristol Bach Choir, including the world premiere CD recording of organ music by Lennox Berkeley as part of the Bach Choir's recent CD Ancient & Modern. He performed these pieces in the City of Oxford Choir's Berkeley Centenary Concert in 2003. "Nigel Nash thrilled with his stirring renditions of Three Pieces for Organ, playing decisively with style and panache." (Oxford Times). In a Bach Choir concert in Gloucester Cathedral the reviewer from the Gloucester Citizen wrote that "The organ was brilliantly played by Nigel Nash. In the first of the solos, Trivium, by Avro Part, he found some delightful registration on the cathedral organ. In the second half of the concert he gave a wonderfully exciting account of Shostakovich's Prelude and Fugue No.3 in G."

In July 2007 he played for a Degree Ceremony for Bristol University where the distinguished organist and renowned Messiaen scholar Jennifer Bate received an honorary doctorate.

Uncategorised music
Angelus ad Virginem
Dance of the Sugar Plum Fairy
Hort ihr Augen
Offertory
Overture to the Marriage of Figaro
Prelude and Fugue in E flat
Russian Contakion of the Departed
The Entertainer
The flight of the bumble bee
The flight of the bumble bee
ScoreExchange.com is operated by ADAP Solutions Ltd. ©
Sell sheet music |
Terms | Privacy |
Contact us | Blog |
Advertise | Help