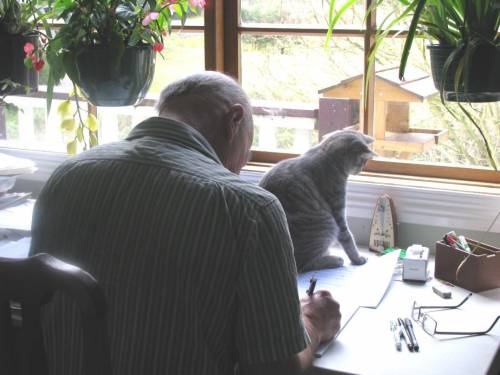 Born in Wales in July 1939, Australian composer Peter Davies insists that he was not the direct cause of the ensuing conflict.

His parents, a left-handed violinist and a female conductor (choir not bus) trained him early as a boy soprano on the Chapel circuit until, at age 10, he turned professional by changing allegiance to the Anglican Church at two shillings per week. He had a lengthy career at St. John's Church Cardiff under the tutelage of V. Anthony Lewis, curtailed when his voice broke at age 16.

Meanwhile, at the instigation of his high school music teacher, tenor and pedagogue Clifford Bunford, he had taken up the French Horn, which he played in the National Youth Orchestra of Wales.

After being transported to Australia by upwardly-mobile parents in 1959 he played in the Australian Youth Orchestra, graduating from Melbourne University around 1963 and joining the ABC's Queensland Symphony Orchestra as a horn player.

As a student he had played in the Princess theatre Orchestra, including 374 performances of "The Sound Of Music", the effect of which he has never quite been able to assess.

Peter began composing in a minor way whilst still a student (A minor being the easiest of the minor keys for this fumble-fingered pianist). His "second study" piano teacher at the conservatorium of Melbourne, Max Olding, once described him as "one of the three worst pianists I have ever heard". (I shall not disclose who the other two were.)

An early arrangement of a Bach gavotte for eight horns was played by the Melbourne Horn Club and triggered an interest in that craft which led him to the position of Music Arranger for the ABC's Tasmanian Symphony Orchestra from 1969. His final performance with the QSO as a horn player was in Beethoven's "Eroica" Symphony, which a reviewer ambiguously described thus: "…the horns in particular were in rare form".

After around a quarter of a century in the employ of the ABC as a horn player, arranger and administrator, Peter became Director of Music at the "Friends' School" in Hobart for a similar period.

Peter was an unsuccessful entrant in the Australian National Anthem contest, where the only rhyming words he could find for "Australia" were "dahlia" and "failure", but he subsequently incorporated his tune into another composition.

Best known for his "Dozen of Dennis" - twelve poems of C.J. Dennis set for children's choir and orchestra - Peter dabbled in composition in his spare moments, but it is only now in retirement that he has the time to revise and present his full range of works to the public.

Now, thanks to the technical expertise of his younger brother Roger and nephew Glynn, these pieces will include choral works, instrumental pieces, brass ensemble pieces, brass band marches, a Trombone concerto and many more items, which should gradually appear on this site. Peter takes a Welshman's pride and delight in manipulating the English language, as the titles of many of his works show.

Many music students have already unknowingly played tunes by Peter, as over the years he has supplied the Australian Examinations board with sight-reading material for all of the woodwind instruments including the Saxophone, as well as composing pieces for inclusion in the Tuba syllabus and editing some of the early Horn grade books.

Outside music, his interests include poultry (an article by him was published in "Australasian Poultry" magazine), gardening, bird-watching, sport, and wondering at the progress of his 10 (soon to be 11) grandchildren.

Peter is pictured above working at his desk whilst the family cat adjusts the metronome, ensuring the purrfect tempo for his latest composition.