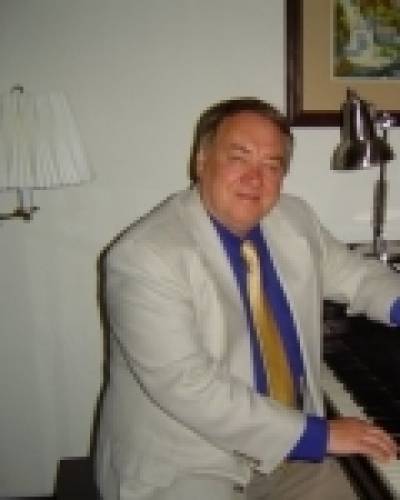 Robert Farrell came to sacred music early. His mother, who had been certified by Rev. Carlo Rossini in the 1930s, was organist at Saint Kieran Church in Pittsburgh. This is a position he would eventually take over, working first as director of the boys' choir, then assistant organist, organist and choir director. He attended Carnegie Mellon University, studying composition with Nikolai Lopatnikoff. He graduated in 1968 with degrees in both Piano Performance and Music Education.

For 30 years he was employed by the East Allegheny School District, where he taught music to children from age 5 to 18. The majority of his time was spent as Choral Director for the Senior High School. "My retirement in 1998 at age 53," he writes, "made a lot of people jealous!"

In 1989 Robert moved the homestead (with wife Mariann and two children) to a 73-acre farm 50 miles north of Pittsburgh. He and his wife (also a choir director) worked together at Saint Patrick Church in East Brady. Robert is also Founder and Director of the Armstrong Community Choir. Currently, he and his wife are singing with Saint Paul's Cathedral Choir, under the direction of Donald Fellows (Pittsburgh). "The cathedral choir loft is special to me," he writes. "While in college I had the honor to sing the Duruflé Requiem in this loft with Madame Duruflé performing at the Beckerath organ. It was her husband's glorious style of mixing modern harmonies with Gregorian chant melodies that inspired my efforts over the years." To contact me: robertgfarrell@gmail.com

Uncategorised music
A Simple Hymn
Abide With Me
Adoro te
Adoro te Devote
Alleluia - Easter Mass
Alleluia - from Christmas Mass
Alleluia, Ye Sons and Daughters
Alma Redemtoris Mater
Amen - Easter Mass
Amen - The Christmas Mass
At The Lamb's High Feast We Sing
At The Name Of Jesus
Attende Domine
Ave Maris Stella
Ave Verum Corpus
Be As The Lillies
Be Thou My Vision
Be With Me
Beata Mater
Behold, Mary
Benediction
Benediction
Beside Restful Waters
Celestial Gloria
Christ Has No Body
Christ Has Risen From the Dead
Christ The Lord Is Risen Today
Christmas Gloria
Christmas Mass - Lord Have Mercy
Come To Me
Common Mass III - Holy
Common Mass III - Kyrie
Confirmatio
Crucifixus
Devotion
Do Not Let Your Heart Be Troubled
Evening and Morning
Fanfare For A Tender Moment
Festive Gloria
For Your Everlasting Love
Forever Near
Forgive Me
Gloria - Easter Mass
Gloria - Festive #1
Gloria - Festive #2
Gloria - People of Faith
Gloria - St. Elizabeth Ann Seton
Gloria on a French Air
Gloria on a Welsh Hymn Tune
Gloria on an Irish Melody
Gloria Simplex
God Alone Is Enough
God Speed His Word!
Good Morning Lord
Gregoria
Gregoria
Gregoria
Hail To The Lord's Anointed
Holy - Christmas Mass
Holy - Easter Mass
Holy - Our Lady of Victory Mass
Holy - People of Faith
How Lovely Is Your Dwelling Place
I Am Here Before The Lord
I Belong to Jesus
I Know That My Redeemer Lives
I Would Cease To Be
If Lord Thy Love For Me Is Strong
In Paradisum
In The Sanctuary of Your Heart
In The Shadow Of His Light
IV. Introit
Jesu, Salvator Noster
Jesus, The Very Thought Of You
Jubilate Deo
Lamb of God - Christmas Mass
Lamb of God - Easter Mass
Lamb of God - Our Lady of Victory Mass
Lift High The Cross Prelude
Lo, How a Rose E'er Blooming
Lord Have Mercy - Easter Mass
Lord Have Mercy - Our Lady of Victory Mass
Magnificat
Many Gifts, One Spirit
Mass - St. Elizabeth A.. Seton - Holy
Mass - St. Elizabeth A.. Seton - Kyrie
Mass - St. Elizabeth A.. Seton - Lamb of God
Mass for Two Voices - Holy
Mass for Two Voices - Kyrie
Mass for Two Voices - Lamb of God
My Heart Belongs To Jesus
Now That Daylight Fills The Sky
O Good Lord
O Magnum Mysterium
O Master Let Me Walk With You
O My Lord God
Open My Eyes
Out Of The Depths
Panis Angelicus
Panis Angelicus #2
Parce Domine
Postlude #1
Postlude #2
Praeparate Corda Vestra
Prelude # 3 on "O Come Emmanuel"
Prelude # 39 on "Abide With Me"
Prelude # 4 on "Pange Lingua"
Prelude # 41 on "At The Lamb's High Feast We Sing"
Prelude #1 "Let all Mortal Flesh Keep Silence"
Prelude #11 on "Christ The Lord Is Risen Today"
Prelude #13 on "Lift High The Cross"
Prelude #15 on "What Wondrous Love Is This"
Prelude #17 on "Adoro Te Devote"
Prelude #18 on "Ubi Caritas"
Prelude #19 on "Attende Domine"
Prelude #2 on "We Gather Together"
Prelude #20 on "Be Thou My Vision"
Prelude #21 on "In Paradisum"
Prelude #22 on "Hail To The Lord's Anointed"
Prelude #23 on "Fairest Lord Jesus"
Prelude #25 on "The King Of Love"
Prelude #27 on "Victime Paschali"
Prelude #28 on "All Creatures of our God and King"
Prelude #29 on "Alleluia, Sing to Jesus"
Prelude #30 on "Veni Sancte Spiritus"
Prelude #31 on Built On A Rock
Prelude #34 on "Salve Regina"
Prelude #35 on "Lo How A Rose E'er Blooming"
Prelude #36 on "Infant Holy, Infant Lowly"
Prelude #37 In The Hour of Trial
Prelude #38 on "Father Most Holy"
Prelude #40 on "Those Who Love and Those Who Labor"
Prelude #42 on "Nearer, My God To Thee"
Prelude #43 on Daily, Daily Sing to Mary
Prelude #44 on Take My Life That I May Be.
Prelude #45 on O Master Let Me Walk With You.
Prelude #46 on Day By Day.
Prelude #48 on The Wexford Carol.
Prelude #5 on "God Rest Ye Merry Gentlemen"
Prelude #50 - By Gracious Powers
Prelude #9 on "Jesus, The Very Thought of You"
Psalm 150
Quarant' ore
Rapture
Rejoice In The Lord
Responsorial Psalm - Easter Mass
Rise Up O Lord!
Rorate Caeli
Salve Mater
Salve Regina
Salve Regina II
Shine Down Your Love
Sing To The Lord
Sonnet
St. John's Lament
Talk To Me Lord
Tantum Ergo
Te Deum
The First Psalm
The Lord Is My Light
The Lord Is My Shepherd
The Mystery Of Faith - Christmas Mass
The Mystery of Faith - Easter Mass
The Night Is Dark and Lonely
The Shepherd
Toccata for Organ
Unison Mass #1 - Holy
Unison Mass #1 - Kyrie
Unison Mass #1 - Lamb of God
Unison Mass #2 - Holy
Unison Mass #2 - Kyrie
Unison Mass #2 - Lamb of God
Victimae Paschali
Victimae paschali
We Gather Together
Where Charity and Love Prevail
Who Am I?
Who Light's The Way?
You Are The Shepherd
You Hear My Cry
Your Everlasting Love
ScoreExchange.com is operated by ADAP Solutions Ltd. ©
Sell sheet music |
Terms | Privacy |
Contact us | Blog |
Advertise | Help