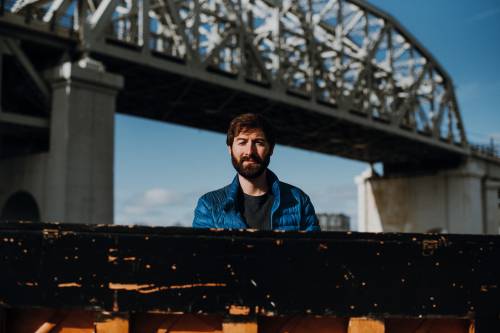 Rob Kovacs is an award-winning composer, pianist and singer/songwriter. He fronts the indie-rock bands, Return of Simple and Math + Logic and is the creator of 88bit where he performs note-for-note piano arrangements of Nintendo soundtracks. He is also an artist in residence for the Arts and Medicine Institute at the Cleveland Clinic.

Kovacs is the first person to perform the solo version of Steve Reich’s Piano Phase by simultaneously playing both piano parts on two pianos. He has performed with other contemporary classical groups including No Exit Ensemble, the Lima Symphony and was the main pianist for the Five One Experimental Orchestra for the final three years of their existence.

Kovacs’ band, Return of Simple, performs his original music regionally. They’ve released one record, Saffron, which is played on satellite, college and Pandora radio. They’ve performed for many festivals and events including MusikFest, Larchmere Porchfest, Lakewood Arts Festival, and the Scene Music Festival to name a few. A second record is due out this year.

Kovacs has composed music for American Greetings’ e-cards and several award-winning short films notably PheMIMEnon (2012 Best Film), Game On (2014) Contest Winner), and Einsam (2016 Best Film), and Al.A.In.A (2018 Best Score) all for the Cleveland 48-hour Film Project. He is also the composer and sound designer for the virtual reality game, Straylight.

Kovacs was recognized as the 2008 Best Pianist/Keyboardist by the Cleveland Free Times (n.k.a. The Scene). He has performed and recorded with other artists including Mark Mothersbaugh, Mega Ran, Parson James, Sandra Bernhard, Rob Rokicki, Natalie Weiss, Rachel Potter, Grace Love, Margot Bingham, Herzog, Leonard DiCosimo and others. Kovacs also performed regularly as a dueling pianist at Cleveland’s Howl at the Moon as well as other dueling piano bars from New York City to Wisconsin. Kovacs held a six-week residency at the Happy Dog at the Euclid Tavern.

Kovacs has arranged and performed over 50 songs from the original NES (Nintendo Entertainment System) with his project, 88bit. He has performed this music for many major events including the Super MAGFest, PAX West, PAX South, the Mensa National Gathering, NeoSonic Fest (twice), and Classic Game Fest (twice) to name a few. Kovacs has also performed with the Distant Worlds orchestra, performing the music from the Final Fantasy series. 88bit has been interviewed by many publications including Game Informer, for “The Sound of Applause” on WCPN 90.3 and blown-speakers.com.

For current info, go to www.robkovacsmusic.com