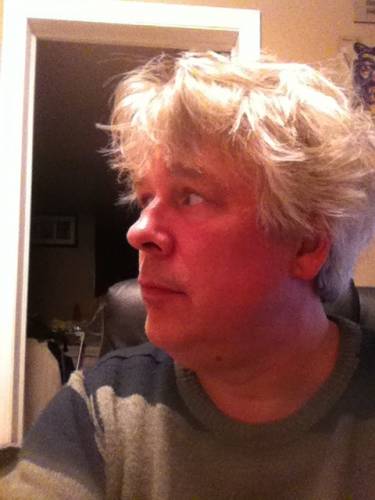 I always felt that rather than being a spectator when it came to music, I should be a participator.

I was twenty-six years old before I struck middle C on the piano seriously. At that time, I gave myself wholly over to the study of music for four years. I took Piano lessons, Violin lessons and with the aid of a private tutor finished the Royal Conservatory's basic music theory, harmony and counterpoint programs, not to mention held down a nine-to-five job in the process. My passion was never to perform music, but only to write it. I wrote down tons of themes, most of which were a single line in the treble clef. Notating music was always for me a wearisome task, but I always saw myself as a good tunesmith.

At the end of the aforementioned four-year period, I wanted to pursue musical composition at the university level but was denied entrance because of not being able to play an instrument at a grade eight level. This was a major setback for me, and I eventually gave up music for approximately ten years because of said setback. However, with the evolution of computer software, in Aug. of 2001, I began writing my music. I don't play an instrument as such (I can play the radio rather good if that counts!); I can bluff my way on the piano enough to compose but not to perform. Approximately half the themes used in my compositions to date were scribbled down years ago. The element of interest now is to both "develop" and "orchestrate" the one-fingered melodies of days gone by. I guess I'm presently making good a part of my past. Most of my music is either a waltz or a march. If you don't like waltzes and marches, chances are you will not like my music; however, if you do like these wonderful mediums of musical expression, you just might find a soft spot for my music.

Since May of 2004, I have put music on the back-burner to give myself wholly over to the writing of a book entitled The Faith. After this project is finished, if the Lord graciously wills, I may revisit some of my unfinished pieces to complete them. Composition will undoubtedly come to an end then.

The Faith ended up being a disaster, really. Two of the three books associated with this trilogy were published and then the company went tits-up–I now find myself in "no man's land," as a result. What else is new! Moreover, my wife/partner of 27 years, Michelle, of whom I dedicated my first waltz, passed away on June 1, 2021. I hesitate to ask the question: "Can things get worse?" because things can and therefore I digress from further comment.