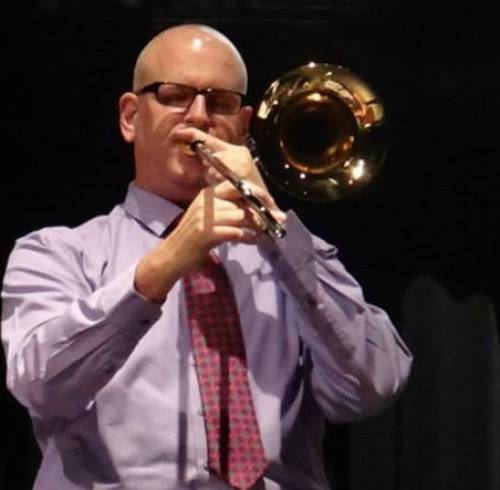 Rich Woolworth is a native of Brookings, South Dakota, and is a graduate of South Dakota State University. He taught public school music at all levels for 20 years, directed award-winning jazz ensembles, and has served as a clinician and adjudicator for various district and state music events. In 1988, he co-founded the South Dakota All-State Jazz Festival, for which he served as Trombone section adjudicator for many years. He is a member of the South Dakota Bandmasters Association, the Sigma Chapter of Phi Beta Mu, the International Trombone Association, the American Society of Composers, Authors and Publishers (ASCAP), and The Enlisted Association of the National Guard of the United States. He is also a past member of the International Association for Jazz Education, and has been named to Who's Who Among American Teachers.

Mr. Woolworth was a member of the 147th United States Army Band of the South Dakota National Guard for over 26 years, serving as Trombone Section Leader and Staff Arranger. For over 10 years, he was the Non-Commissioned Officer in Charge of "The Top Brass", the band's official jazz ensemble. His charts were performed by the band on a regular basis, and several have been recorded. Under his leadership, "The Top Brass" performed for the inaugurations of all South Dakota governors, toured extensively all over the upper Midwest, recorded two television specials and the first-ever compact disc recording to be released by a National Guard band, "Infinite Variety". He led "The Top Brass" on two successful overseas deployments to Central America; Guatemala in 1991 and Panama in 1996. For the band's CD "The Jazz Compositions of Rich Woolworth", he wrote all the compositions, played bass trombone, directed, and served as producer. He was awarded the Army Commendation Medal, the Army Achievement Medal, and the Meritorious Service Medal for his efforts.

Mr. Woolworth has performed with numerous Midwestern bands and orchestras, including the Al Warren Orchestra, the Miller Big Band, the Sioux Falls Municipal Band, the SDSU-Civic Symphony, the Watertown Big Band, the Watertown Municipal Band, the Jeff Peronto Jazz Orchestra, the Capitol City Band, the Madison Wind Ensemble and the Neophonic Jazz Orchestra. He was a founding member, staff arranger and musical director of "The T-Bones Rare", an octet made up of amateur and semi-professional trombonists in the Watertown, South Dakota area. He has performed with jazz artists Denis DiBlasio, Dizzy Gillespie, Bunky Green, Frank Mantooth, Willie Thomas, Tierney Sutton, and big band vocalist Connie Haines.

Mr. Woolworth's 70+ original jazz ensemble compositions, available through Jalen Publishing, have been performed and recorded by bands at all levels, from middle school to professional, all over the world. His compositions have been featured by bands at the Midwest Band and Orchestra Clinic in Chicago, and several have been named to J.W. Pepper's "Editor's Choice" lists.

Mr. Woolworth maintains an active schedule as a clinician and guest conductor.