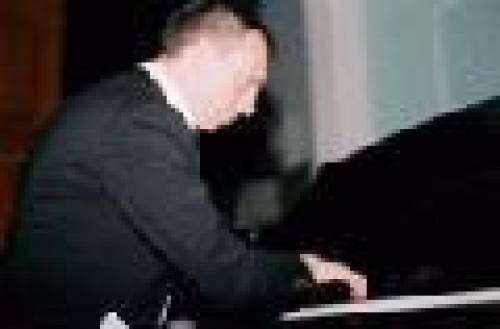 Samir Fejzic, professor, composer and pianist was born in Sarajevo, Bosnia and Herzegovina, where also graduated from the Sarajevo Music Academy in 1998. Currently works as a professor at a Secondary Music School Sarajevo. Stylish variety is his main characteristic. In his works is possible to feel multiplicity of different influences, but one thing is visible as a constant, and that is influence of classic styles, which he has assimilated during education, and later elaborate as a lecturer. Primarily, thinking on Palestrina�s classical vocal style, and then Bach�s instrumental, and vocal-instrumental music. Following that he finished the book 'Vokalni kontrapunkt' in septembar 2003. Parallel with composing and lecturing Samir Fejzic performs as a jazz pianist, so �till now he recorded three albums, among them he would accentuate album 'Vintage', with Swedish singer Karolina Ollinen. That work left an influence to his compositions to. Remarkable part of energy he directed to affirmation of BH culture, and traditional inheritance (he arranged and stylized traditional Bosnian tunes called sewdalinka) - in 2009 published a new album "Bosnian Songs For Voice And Trio". For his work he gets many awards and laurels. Here is a list of his works: - Suite, for piano; - Toccata, for piano; - XL Sewdah - 'Bijeg', for two pianos and four players; - 'XL. Sevdah br.1', for five instruments; - 'Sieben Tage', string quartet; - 'Bosnian Nocturne�, for two flutes; - 'Eine Kleine Nacht Musik II�, for two flutes and piano; - 'Mujo kuje', for three sopranos and piano; - 'Bosnian Songs For Voice And Piano�, collection; - 'Stylizations�, for three instruments; - Cycles chorus compositions to poems of Mak Dizdar - 'Gorčin', cycles of songs for baritone and piano.