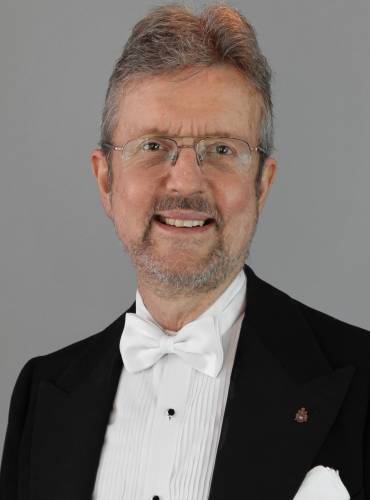 Gordon Slater, born in 1950 in Toronto, Canada, has played piano, organ and carillon since childhood and in school began studying bassoon and conducting. His first carillon experience was as assistant to his father James, former Carillonneur at Metropolitan United Church in Toronto. Gordon Slater studied at the University of Toronto's Faculty of Music and held a position as a church Organist and Choir Director as well as four Carillonneur positions. He has conducted orchestras, choirs, bands and musicals in Toronto and Ottawa and is now retired from the position of Dominion Carillonneur of Canada after 31 years of service playing the Peace Tower Carillon there. He has been Music Director of Divertimento Orchestra since 1987 and has played the bassoon and contrabassoon with the Ottawa Symphony Orchestra since 1979. In 2008 he was awarded the Berkeley Medal by the University of California for distinguished service to the carillon. Gordon tours widely as a carillonneur and clinician.