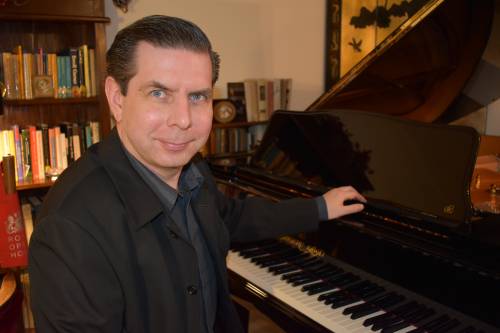 I'm Steve Law, a composer and pianist from London. I received MMus in composition from Bristol University for my jazz opera/musical Heaven On Earth (1994-1998). This was a black comedy combining popular, jazz and classical music with a wide range of other styles. It is full of memorable melodies, expressive harmony and counterpoint as well as driving rhythm, and was described as a significant contribution to the genre. Listen to it at http://www.stevelawcomposer.com/heaven-on-earth/listen-watch-heaven-on-earth/

I suspect my MMus was an even bigger contribution to the music department's tea and biscuits fund!

I've also made many transcriptions including all Gershwin's solo recordings inspired by the brilliant Jack Gibbons to whom we owe a lot. I've also transcribed and arranged music by the late Dudley Moore - whom I was privileged to meet back in 1999. My transcriptions of his 'Songs Without Words' are published by Faber.

My music is melodic and rhythmic and influenced by romantic, 20th century, pop and jazz music.

In my opinion serial music is dead - other than being effective for horror film music. The public have never liked it and classical music is being freed from it's influence. There are no trends or directions any more. It is time to get back to writing music that is memorable and has something to say.