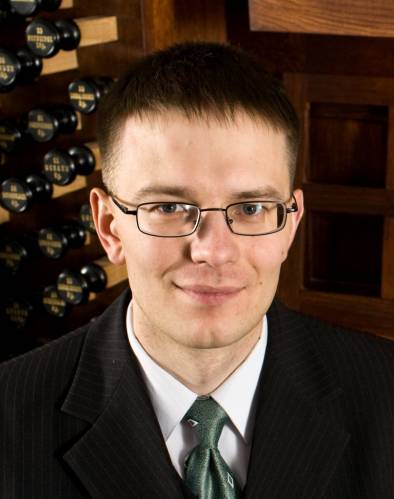 Dr. Vidas Pinkevicius is a founder of the blog "Secrets of Organ Playing - Down-to-earth tips and advice about how to play the organ.

He also is an active promoter of organ improvisation and the organ art and popularizes this instrument through various lectures, seminars, demonstrations, and recitals.

V.Pinkevicius graduated from the Lithuanian Academy of Music and Theatre in Vilnius with Bachelor‘s and Master's degree in Organ Performance. He also holds Master's degree from the Eastern Michigan University (USA) under Dr. P.Ruiter-Feenstra.

V.Pinkevicius graduated from the University of Nebraska-Lincoln (USA) with the Doctor of Musical Arts degree in Organ Performance where he studied under Dr. Q.Faulkner and Dr. G.Ritchie. At UNL, V.Pinkevicius has defended his DMA dissertation on Improvisation of Keyboard Preludes in the Style of J.S.Bach.

V.Pinkevicius won several prestigious scholarships and prizes, including Graduate Performance Competition at Eastern Michigan University in 2002. V.Pinkevicius performed recitals in many venues in Europe and the USA, including several international festivals. He participated in a number of major masterclasses and organ academies in Sweden, Austria, the Netherlands, USA, and other countries.

As a soloist, he performed with leading Lithuanian orchestras. V.Pinkevicius frequently performs in organ duet together with his wife, Dr. A. Motuzaite-Pinkeviciene. In 2008, V.Pinkevicius together with the flutist G.Gelgotas has released the first ever CD recording of the organ of Vilnius University St.John‘s church which is the largest pipe organ in Lithuania.

V.Pinkevicius also is the iniciator of the NAO educational project „the Organ for the Future of Lithuania“ with the goal to introduce the pipe organ to general audience in various parts of Lithuania, especially to children. As part of his educational efforts he has performed more than 60 organ demonstrations "Meet the King of Instruments" in various towns of Lithuania.

Currently, he is executing a project "Seven Centuries of Organ Music" in Vilnius University St. John's church with the goal of performing 20 recitals in 2011-2013 devoted to all major historical periods and national schools of organ composition.