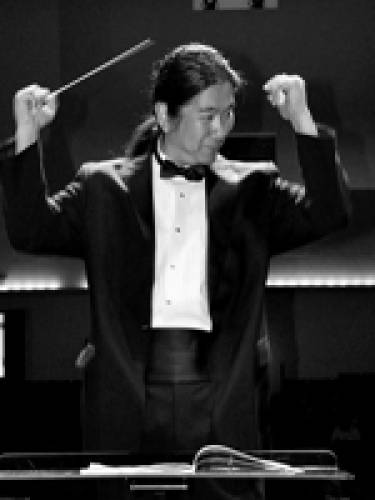 Dr. Yutaka Kono, Director of Orchestra, Assistant Professor of Music, was born in Tokyo, Japan and began studying piano at age of 7. He began playing the tuba in middle school, and continued when he came to the US as an exchange student. He received a Bachelor of Music magna cum laude from Bowling Green State University in Ohio and a Master of Music from the University of Minnesota-Twin Cities. Then, he became the first person ever to receive a Doctor of Musical Arts Degree in Tuba performance from The University of Texas at Austin. While pursuing the tuba degrees, Dr. Kono also studied piano, composition and conducting. He was the Assistant Conductor of the Kingsville Symphony Orchestra (TX) and previously taught at Texas A&M University-Kingsville, The University of Texas at San Antonio and the University of Mary Hardin-Baylor in Belton, Texas. He has studied conducting with Jerry Junkin, Mark Kelly and Eugene Dowdy. Dr. Kono was selected to attend the Round Rock Symphony Conductors Workshop where he studied with Maestro Peter Bay, the Music Director of the Austin Symphony and Maestro Silas Huff, the Music Director of the Round Rock Symphony. He studied composition with Alex Lubet, Stephan Paulus, and Donald Grantham.

Dr. Kono is a highly active performer on tuba. As a soloist, he is the winner of the concerto competition held at the University of Minnesota and performed with several orchestras and bands in Ohio, Minnesota, Texas and Tokyo. As a chamber musician, he performed with the Austin Symphony Brass Quintet, Austin City Brass, Austin Brass Ensemble, and a jazz ensemble–Tina Marsh’s Creative Opportunity Orchestra. His orchestral credits include the San Antonio Symphony Orchestra, Austin Symphony Orchestra, New Texas Music Festival Orchestra, Bowling Green Symphony Orchestra, Perrysburg Symphony Orchestra and many others. His diverse interest has led him to perform with non-classical ensembles ranging from Jazz, Dixieland to Rock and Klezmer. A strong advocate of music education, he has taught hundreds of students and provided countless number of clinics and workshops. He studied the tuba with Ivan Hammond, Ross Tolbert, and Steven Bryant. He recently completed a solo tour of Japan in summer 2011.

Dr. Kono’s recent conducting highlights include the World Premiere performance of Flight by Marcus Karl Maroney, and the TAMUK Faculty Chamber Ensemble on William Walton’s Façade. He has also served as guest conductor clinician for the Regional Orchestras in the South Texas area and is a sought after conductor for Chamber Ensembles. He has conducted the season opening concerts of the Kingsville Symphony Orchestra for the past four years. His book and transcriptions are published from Tuba Euphonium Press, BVD Press, and Linus Publications.