Sign in / Register
HomeInstrumentationsString quartetString Quartet #3: "Romance With A Melody on the Theme of True Love"

String Quartet #3: "Romance With A Melody on the Theme of True Love"

By: Benjamin Sajo
For: String quartet
This music is in your basket
View basket
Loading... 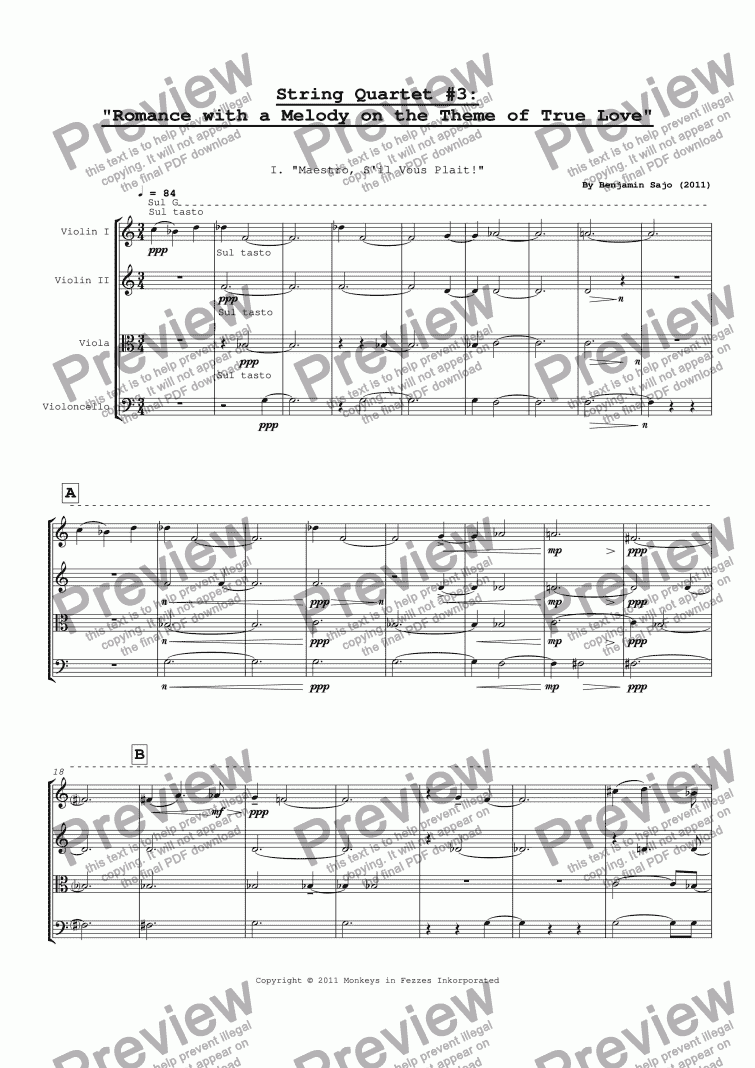 String Quartet #3: "Romance With A Melody on the Theme of True Love"

By: Benjamin Sajo
For: String quartet

Composer
Benjamin Sajo
Year of composition
2011
Difficulty
Difficult (Grades 7+)
Duration
15 minutes
Genre
Modern classical music
License details
For anything not permitted by the above licence then you should contact the publisher first to obtain permission.

I. �Maestro, S�il Vous Plais!� II. �The Serpent�s Bathtub� III. �Beethoven Was A Coal Miner� IV. �A Wink on Saturn� V. �When we get out of the glass bottles of our own ego� VI. �Out of a winter�s silky fur� VII. �The passion of truth is the embrace between Man and his God� VIII. �Let�s Plow The Road!� IX. �Yesterday�s rose endures in its name, we hold empty names.�

This string quartet is a series of nine variations, interpreting a nine-note row, in all of its permutations. On a macro-level of form, the pitch classes of the row behave as �key centers� for each variation. The grandness of the title was inspired by Dave Eggers A Heartbreaking Work of Staggering Genius, which, to quote the New York Time�s review of that novel, is �Big, daring, [and] manic depressive.� The title �" and in many ways that review byte �" is as far as the similarities between the novel and my string quartet go. I am fond of intertextuality, and designed this string quartet to be a labyrinth. While on the surface level many of the inside jokes will be missed, they can be freely interpreted. The subtitles were chosen afterward, and loosely connect to the mood of each movement, either literally or ironically. I �" IV are from the conversations of friends, V-VII come from random lines from D.H. Lawrence�s poetry, VIII comes from Bill Pullman�s line from the film Independence Day as he�s about to attack the alien spaceship, and the last subtitle comes from Umberto Eco�s Name of the Rose. RWAMOTTOTL treats its nine-note row as a subtle idée fixée (the phantom of our dreams, the foam of light through the mist) and in each variation, puts on new clothes, while maintaining it�s four-sided (Prime, Retrograde, Inversion, Retrograde-Inversion) identity:

I. Adaptation in a tonal language. II. A single melodic line, with percussive elements; a regular pulse of 42 attacks in the cello under a steadily decelerating trio (42 being the answer to the Ultimate Question to Life, the Universe, and Everything, in Douglas Adam�s Hitchhiker�s Guide to the Galaxy.) While the temporal lengths of each of the subsections of this movement is derived from the movement�s Golden Mean, the number of measures within each section are, in order, 23, 15, 8, and 4, inportant numbers from the ABC television series Lost �" numbers which, as part of the Valenzetti Equation on the show�s mythology, are factors that determine the point in time when humanity will extinguish itself. III. Adaptation through canonic imitation, neo-fauxbourdon, and dissonant counterpoint. IV. Adaptation through atonal fugue. V. Adaptation through repeated chords derived from the row Golden Mean VI. Adaptation exclusively utilizing rotational arrays in determining harmony. VII. Adaptation continuing use of rotational arrays, but with incessant ostinati at odds with one another. VIII. Adaption through transforming the row into a scale of which to freely extract pitch material, though limited to that transposition (no third degrees) IX. Similar scale construction as VIII, though using a form of integral serialism. Once the vertical sonorities were freely constructed, I divided them into phrase groups. The silence between phrase groups increases from 1, 2, 3, 5, 8, 13, 21, 34 seconds in each voice. The interval distance between one pitch and its follower would be translated to a duration for the first note: �� Interval Class 1 = quarter note �� IC 2 = half note �� IC 3 = dotted half note IC 4 = whole note �� IC 5 = whole note tied to a quarter note �� IC 6 = dotted whole note. In the spirit of the title of the last movement, a Latin phrase popularized by Umberto Eco�s The Name of the Rose, �Stat rosa pristina nomine, nomina nuda tenemus� originally scribbled down by a 12th century Benedictine monk Bernard of Cluny, the players silently finger the notes during the long rests, not only to delay the audience from prematurely applauding, but ultimately balancing in the most extreme way possible the fast material preceding this movement.

Reviews of String Quartet #3: "Romance With A Melody on the Theme of True Love"