By: W.H. Monk
For: Military band
This music is in your basket
View basket
Loading... 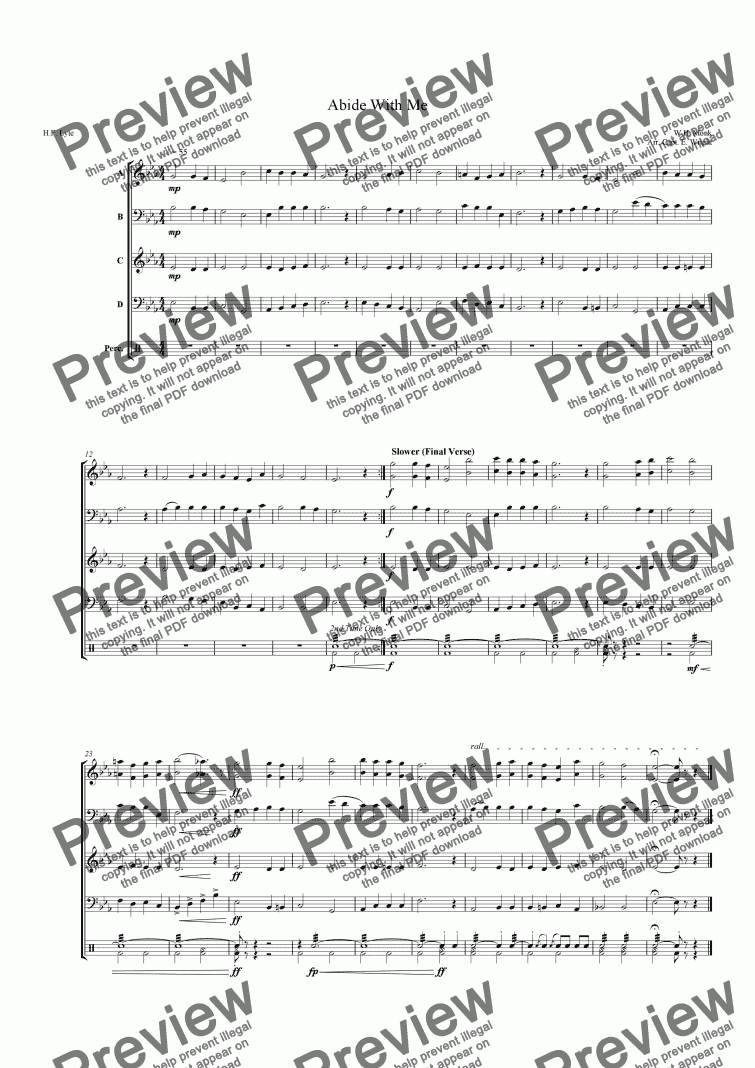 By: W.H. Monk
For: Military band

Composer
W.H. Monk
Year of composition
1847
Arranger
Elliot Wright
Year of arrangement
2012
Difficulty
Easy (Grades 1-3)
Duration
2 minutes
Genre
Other
License details
For anything not permitted by the above licence then you should contact the publisher first to obtain permission.

Abide With Me is a Christian hymn, written by Henry Francis Lyte in 1847, shortly before his death. It is most commonly sung to the tune of Eventide by William Henry Monk. It is played and sung at various religious and military ceremonies throughout the commonwealth and the world.

This piece is written in 4-part harmony, making the “C” part just as important as the “B” part. The DMus should ensure that “B” and “C” parts are evenly distributed for best effect. As always, ensure that “B” and “C” do not individually outweigh “A”. For the most even sound, try to balance A, B and C parts across each section evenly (i.e. an even distribution of A, B and C parts among the Flutes and clarinets, an even distribution among Trumpets, and an even distribution among Saxophones). Then unite the Lower –pitched instruments (Tenor Sax, Bari Sax, Bass Trombone, Tuba, Euphonium) under the D part where possible, and see how it sounds. Consider also treating the Trombones (if you have enough of them) as “tenor” instruments, and give them an even balance of parts.

The “B” part is more “difficult” than the “C” part due to its slightly larger range of movement; but it is generally lower-pitched. For this purpose, if you find the mix too “muddy”, consider the selection of instruments playing the B and C parts; then try putting lower instruments of that group on “B” and higher instruments on “C”, and see if the tone is clearer.

The first verse is generally kept in low register where possible, to maintain a warm sound. In the final verse, some instruments have the option of playing up an octave written into their parts. If possible for the player, this is recommended for dramatic effect.

Reviews of Abide With Me