By: Frederick the Great
For: Military band
This music is in your basket
View basket
Loading... 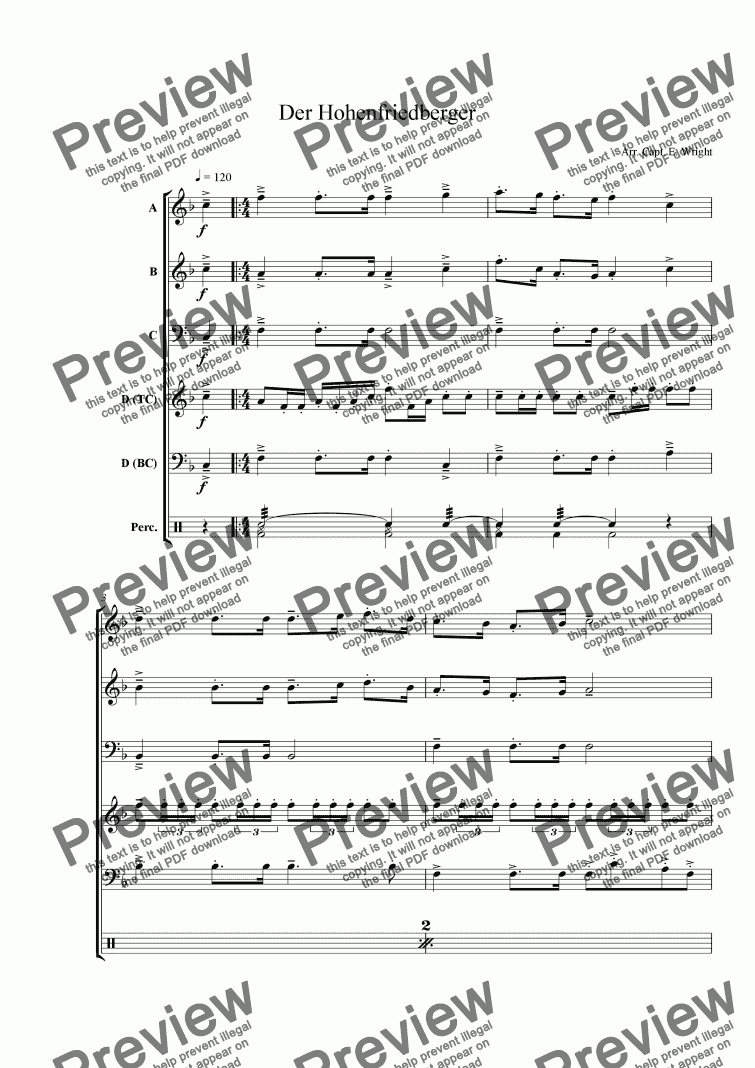 By: Frederick the Great
For: Military band

Composer
Frederick the Great
Year of composition
1755
Arranger
Elliot Wright
Year of arrangement
2012
Difficulty
Easy (Grades 1-3)
Duration
2 minutes
Genre
Other
License details
For anything not permitted by the above licence then you should contact the publisher first to obtain permission.

This stately Prussian fife tune originates from the Battle of Hohenfriedberg on 4 June 1745. Frederick of Prussia (allied to Britain at the time), earned his title of “The Great” at this battle, when his forces defeated the Austro-Saxon army opposing him, making it a significant battle in the European Theatre of the Seven Years’ War. Key to this victory were the Bayreuth Dragoons, who were able to flank and destroy the two main battle lines deployed by the Austrians, capturing 67 flags and standards. The original tune “Der Hohenfriedberger” was written soon after, and given lyrics praising the Bayreuth Dragoons. It immediately became a staple of Prussian (and later German) nationalism.

While looking for material to celebrate his home squadron’s origins in Lahr and Baden Germany, Lt. Wright came across the piece, and while toying with the piece in summer 2009, wrote new words to form a course song for the Introduction to Leadership Course (ITLC). The song was (somewhat) learned and sung by the cadets on two intakes of the course in its final year before being re-written and phased out:

"Oh, We set the standard on I-T-L-C! We Lead by example, as polished as can be Our Flight staff will train us, and keep us keen Our leaders to follow, and young ones to lead; And When we’re on parade, or marching down the street, A Thunderous cadence will rise from our feet Tally ho! Here we go! And we’ll show you what we mean, ‘Cause here goes another day on I-T-L-C!"

This piece contains two “D” parts – one for Bass Clef, and one for Treble Clef. The “Treble Clef” part is an adaptation of a bugle decoration which is heard in many recordings of the piece. It is completely optional, and is best used on the final verse of the piece. Consider issuing this to a Piccolo, or a second Trumpet (with excellent chops!), and have them turn to it when they reach the “D.C” marking, to add some extra “flair” to the final play-through.