(or "March for the Bohemian Militia")

By: Ludwig van Beethoven
For: Military band
This music is in your basket
View basket
Loading... 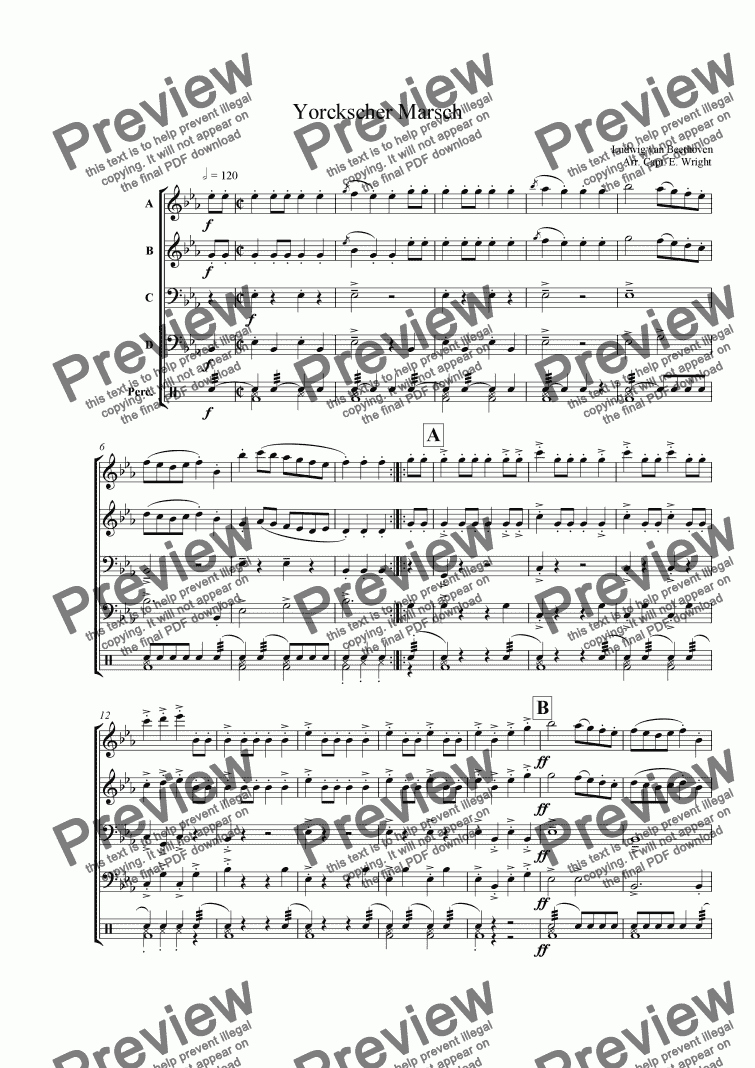 (or "March for the Bohemian Militia")

Composer
Ludwig van Beethoven
Year of composition
1808
Arranger
Elliot Wright
Year of arrangement
2012
Difficulty
Moderate (Grades 4-6)
Duration
2 minutes
Genre
Classical music
License details
For anything not permitted by the above licence then you should contact the publisher first to obtain permission.

A few decades after the Seven Years War in which Der Hohenfriedberger was written, the French Revolutionary Wars and later the Napoleonic Wars engulfed Europe.

Originally written in 1808, as “March for Military Band No. 1 in F Major, WoO 18”, this piece gets its name from Prussian General Yorck (which explains the strange spelling), and sometimes also goes by other titles, including “Marsch des Yorck’schen Korps” and “March for the Bohemian Militia”. It was the first in a set of three military marches written by Beethoven.

Beethoven was a strong believer in the revolutionary ideals of Liberty, Equality and Brotherhood, which at the time were often spread militarily in Europe. He even dedicated his third symphony to Napoleon Bonaparte (at least until Bonaparte crowned himself Emperor); and many of his works focus on the great optimism of the Enlightenment, and the revolutionary hope of a new, free world order. Yorckscher Marsch is still performed today as the first march of the Grand Tattoo in Germany, and is the official march of the “Wachbattaillon”, the German Army’s Elite Drill Unit.

As enthusiastic as he was, it is clear that Beethoven was more familiar with strings and orchestras than he was with marching bands – the player will notice that the piece affords very few opportunities to breathe, and its pace is not particularly at home in our 120-bpm “Quicktime” – consider trying slower tempos, or using it as an inspection piece.

As a note to the DMus, it is beneficial here to put the Tuba on “C”, so that the Trombones can take advantage of the brief harmonic line in the “D” part without losing the unity of the bass line.

The DMus should note - this is the most difficult piece in this collection.