My account
Help Contact
HomeGenresOtherSong Of The Hollow Children (from Jubilee Cantata 2002 'Better The World With A Song'.

Song Of The Hollow Children (from Jubilee Cantata 2002 'Better The World With A Song'. 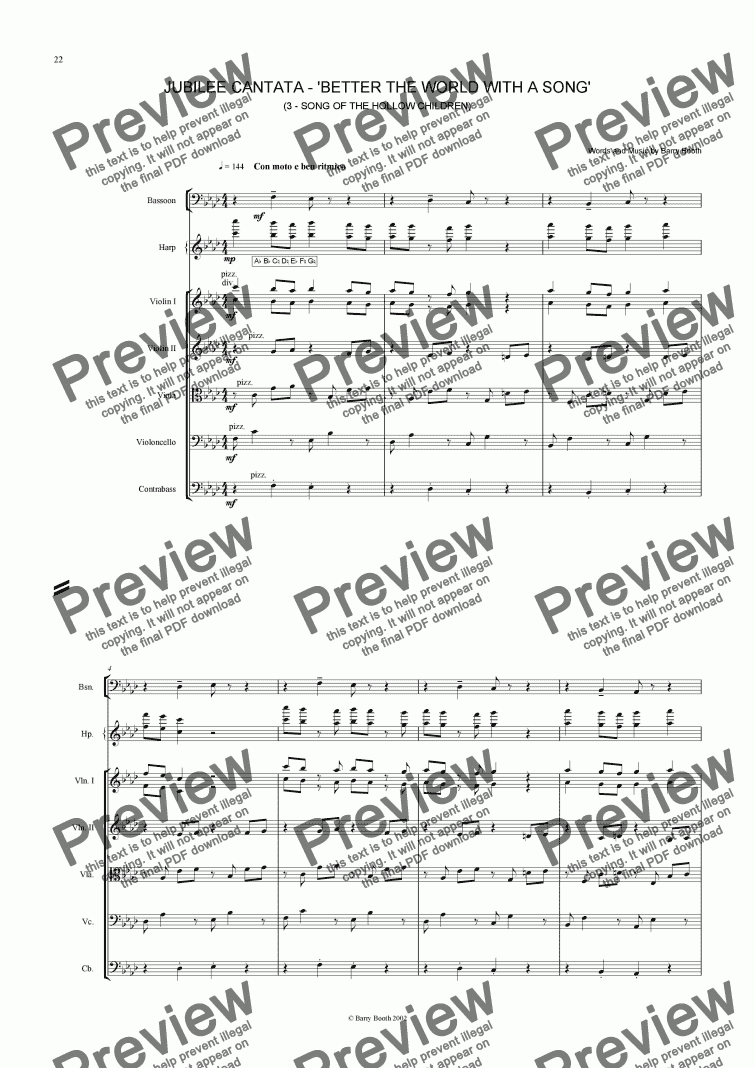 From my Jubilee Cantata 'Better The World With A Song', a work commissioned by the Education Department of Wandsworth Borough Council. The performance took place in the presence of Their Royal Highnesses The Earl & Countess of Wessex (Prince Edward and his wife Sophie), on July 4th 2002 as part of the celebrations to mark the Golden Jubilee of Her Majesty Queen Elizabeth 2. The piece involves a full orchestra, choir, massed childrens voices, massed descant recorders, four vocal soloists, dancers, and a rock band. There was one three hour rehearsal before the performance which lasted one hour. An 'actuality' recording was made of the performance from which I have made shorter MP3 files, some of which I have attached to individual items. Otherwise the MP3 files are 'virtual' simulations).

'SONG OF THE HOLLOW CHILDREN' is the first item the children perform in the cantata and is a piece for choral speaking, a plea for a decent education. The lyric refers to the old children's game of 'Riddle Me Ree' and is addressed to a Sibyl. I include here a programme note by way of elucidation. SIBYL In Greek mythology the Sibyls were women of prophetic powers, that of Cumae being the most famous. She was granted long life by Apollo, at her own wish, as many years as she held grains of sand in her hand; but carelessly she forgot to ask for eternal youth. Hence she aged and her prophetic authority declined. She was a source of cryptic knowledge and answered questions by throwing to the winds handfuls of leaves bearing letters. Those that the enquirer caught, he had to arrange in the right order. Thus she divulged forbidden knowledge in riddles. The Sibyl was also a gatekeeper to the underworld.

In order to submit this score to ScoreExchange.com Barry Booth has declared that they own the copyright to this work in its entirety or that they have been granted permission from the copyright holder to use their work. If you believe that this score should be not available here because it infringes your or someone elses copyright, please report this score using the copyright abuse form.

Reviews of Song Of The Hollow Children (from Jubilee Cantata 2002 'Better The World With A Song'.